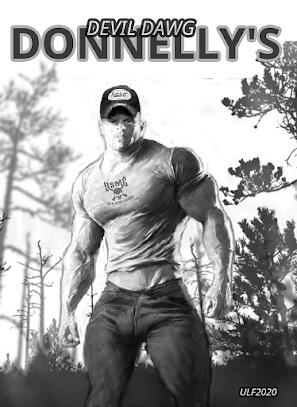 "You're full of shit!" JD said mockingly, shoving Davy Turner sideways in the seat next to him. His teammates and buddies Matt Brewer and Jason "Pee Wee" Dunne shaking their heads and agreeing with him.
"I swear on a stack of Bibles dude, I saw it with my own two eyes!" Davy insisted.
"Then you need fukin' glasses" Jason admonished in his deep baritone voice, his huge hand taking a playful swipe at Davy's blond haired head from across the table at the Pizza Hut coach Tuck Pullman had taken them too.
Moments before Davy Turner had told them about what he'd seen this morning when he arrived early at their highschool gym at 11am, his mom needed to drop him off early because she had a doctor's appointment to get too by 11:30.
He had seen that the coaches truck was there and he had headed in through the back entrance to the gym where the coaches office was, thinking he'd see if he needed a hand getting the day's equipment out and set up on the baseball field and in the dugouts.
He'd poked his head in the coaches office and though the lights were on, the coach wasn't in there, so he decided to just go take a quick whizz in the locker room before he headed out to the field, thinking that's probably where the coach was, but when he got to the locker room he could hear a shower running and figured the coach was probably taking a quick one before the team got there; normally he would have just headed back outside, but he really had to piss so he decided to see if he could just sneak passed the shower room entrance and hit the head real quick without disturbing the coach, but as he got closer to the shower room, he could hear someone moaning real low the kind of moans guys make when they are having sex.
Davy kind of grinned wickedly and told them he thought the coach had his ol' lady in there bangin' one into her so he had gone full stealth mode so he could take a peek.
They'd all started bro punching him on the shoulder calling him a perv: "Like all you guys wouldn't have done the same thing." he taunted, everyone snickered because they knew it was true.
"Anyway..." he continued: "when I got there what do I see, ain't nobody with the coach, but he's naked and pounding his pud right there in the shower" they all just looked at him in disbelief especially after he told them the second part of it.
"I'm tellin' ya, it was nuts, I ain't ever seen nuthin' or heard of nuthin' like it!" his eyes wide as saucers talking excitedly, his face flushing red at the recollection: "He was sitting his ass on a baseball bat!"  it was then that JD had called bullshit.
"Nah' dudes" Davy now insistently continued: "At first I just thought he was just resting against it, then I saw him ease back with the bat handle wedged against the floor and wall and I watched him lower his asshole down on it like about 4 inches or so" he paused letting that visual sink in: "I'm thinking how the hell could ya get something that size up your butt-hole that far and not split yourself in two, but he didn't stop there." He paused again trying to catch his breath before going on: "I know ya ain't gonna believe me, but I shit you not, the coach sort of squatted, reached between his legs and using both hands on the handle of that Louisville slugger, slid it up there at least three quarters of the way, everything except where his two hands was holding it."
All of them laughed at Davy, absolutely certain he was totally full of shit now, making the whole thing up.
"I knew you guys wouldn't believe me!" he stammered, knowing his pride was on the line now, he pulled out his phone and pulled up a file on it and hit play, and there it was, a video of their coach in the shower fucking his asshole with a baseball bat, not just a little bit but just like Davy said, he was practically shoving the whole thing in and out of his ass and almost more impressively, without even touching his dick, they watched as he rammed the bat in and out as fast as he could, he groaned real loud and started spraying jizz all over the shower room floor.
They all just sat there, faces red and flushed, but all agreeing that if Davy hadn't recorded it, they wouldn't have believed it possible, even after seeing it, they still couldn't believe someone could take something that big up their butt let alone take almost the whole damn thing, even more astonishing that the person doing it was their macho, married, redneck baseball coach.
*****

"Mmmmmm...mmm....mm" Gavin Hollis moaned, his swollen puffy lips still firmly wrapped three quarters of the way down the still fully erect phallus of Billy Donnelly, whose still pulsing dick head still oozed his thick testicular juices into Gavins hungry mouth.
Gavin once again, his mouth full to overflowing with Billy's thick hot sperm, languishingly savored the viscous fluids, swirling them around the fat cock in his mouth, enjoying the tingle of his little swimmers on his tongue and the subtle nuanced bouquet of saline, starch and sweetness.
Gavin has been sucking this beautiful member, off and on now for hours, in fact this was the fifth load Billy had blasted into his mouth, each as thick and plentiful as the last. Gavin marveled at his virility, but as he slowly let this load join the others in his belly by gulping it down in spurts allowing him to prolong his enjoyment,  he knew this had to end, his jaws ached, his lips were swollen and puffy from all the suctioning as was Billy's now bloated foreskin, but he never complained, allowing Gavin to satiate himself from all those years of pent up sexual repression, gorge himself passionately on the bountiful feast that is Billy's manhood.
"Looks like someone finally had enough" Billy chuckled softly, his voice thick and dry from hours of moaning as Gavin suckled him into blissful oblivion.
Indeed, Gavin reluctantly allowed the firm turgid flesh to slip from his lips and wetly smack against Billy's abdomen, bending gently down and giving it one more long lick and a sweet kiss on the tip as his tongue swiped into his glans orifice for one more tasty reminder before rising up, stretching and turning to smile gratefully at the man who made this wonderful day possible.
"You really suck" Billy said laughingly, his own head still recovering from the fugue-like state he'd been in most of the afternoon and early evening.
Gavin smacked him on the thigh and stood up, looking down at the mess he himself had made from his own ejaculations.
"Come on dude, we need to get cleaned up" Gavin said offering Billy his hand for assistance in getting up: "My mom will be home soon and she can't catch us like this."
Billy laughed again: "How are you gonna explain them big ol' lips of yours to her?" Gavin rushed over to the mirror above his dresser: "Shit dude, it looks like someone punched me in the mouth."
A large smirk spread across Billy's face: "Someone did, Me!" He said chuckling again: "I've been dick punching them almost all day."
"Ha ha monkey boy" Gavin sneered coyly.
"If I'm the monkey that makes you the organ grinder" Billy's smirk broadening into laughter before offering: "Put some ice on them that should help with the swelling."
"Damn Donnelly that's almost smart, who knew you had a brain inside that thick skull" Gavin quipped lightly punching Billy in the chest.
"Barely" Billy smiled: "I thought you we gonna suck them all out through my dick cocksucker"
Gavin grinned responding: "Okay Donnelly, go get the shower started while I go get some ice for my cocksucker lips" He chortled before adding: "Besides, I don't have time to have a battle of wits with an unarmed person." Gavin ducked Billy's swing as he ran down the hall to the kitchen.