German Minister Trying To Break The Chains Of Gay Oppression 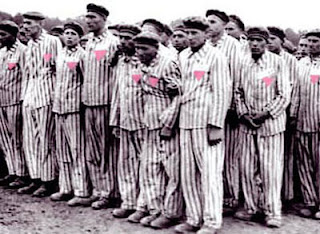 A German minister has defied coalition rules and turned same-sex marriage into a key issue for the 2017 general election.
Heiko Maas, Germany’s Minister of Justice and Consumer Protection, has voiced his support for same-sex marriage in an open letter.
It was published in honor of the fifth anniversary of the Bundesstiftung Magnus Hirschfeld, a foundation dedicated to researching the lives of LGBT people and educating society to end discrimination against the community.
‘We need to defend Magnus Hirschfeld’s legacy with all our might,’ he wrote.
‘Especially now, as right-wing populists once again wake resentments, make homophobia socially acceptable and want to revive the 1950s’ outdated models of family and society.’
Maas recently introduced a draft law which would pardon gay men prosecuted under anti-gay laws. It faced opposition, with critics saying the law wouldn’t go far enough in terms of rehabilitation.
Today, the minister representing the Social Democrats, said the LGBT community could count on his support and pointed out Germany’s strength ‘is based on freedom and diversity’.
‘Germany is a strong country, because everyone here can live after their own model of life,’ he said.
‘To promote this diversity, and to protect it against discrimination, that’s what the Bundesstiftung Magnus Hirschfeld very successfully works for,’ Maas said.
‘In the future, it can continue to trust in my support, for example when it comes to supporting marriage for everyone.’
Currently, same-sex couples can enter civil partnerships but are limited when it comes to adopting children.
Full marriage equality would also automatically grant them full adoption rights.
For his statement, Maas, who represents the Social Democrats in the German Bundestag, is likely to face opposition from the conservative Christian Democrats, who are part of the coalition government.
Today, they rejected the notion, saying same-sex couples in civil partnerships are already able to adopt – but it is limited to their step children.
But not all Christian Democrats oppose marriage equality.
‘With regards to equality, I consider opening marriage to same-sex couples to be urgently needed,’ said Stefan Kaufmann, who represents the Christian Democrats in the Bundestag’s education committee.
‘When two registered partners legally have nearly all the rights and responsibilities spouses have, and so take long-term responsibility for each other, they should not be denied marriage.’
Posted by Ulf Raynor at 4:48 PM