Ted Cruz Is An Asshole 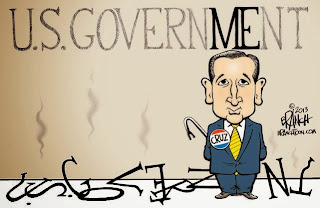 Texas Senator Ted Cruz on Tuesday accused the media of being obsessed with sex after fielding several questions on marriage equality.
The Republican presidential hopeful sparred with reporters on his way to meet privately with Jefferson County officials in Beaumont, Texas, according to The Texas Tribune.


“Is there something about the Left – and I am going to put the media in this category – that is obsessed with sex?” Cruz rhetorically asked after being asked multiple questions on gay rights. “ISIS is executing homosexuals – you want to talk about gay rights?”
“This week was a very bad week for gay rights because the expansion of ISIS, the expansion of radical, theocratic, Islamic zealots that crucify Christians, that behead children and that murder homosexuals – that ought to be concerning you far more than asking six questions all on the same topic.”
Cruz is leading the fight against marriage equality in the Senate, introducing a constitutional amendment which would exclude gay couples from marriage by defining the institution as between a man and a woman and a bill which seeks to prohibit federal courts from ruling on cases related to marriage.
He defended his efforts, calling the expansion of “mandatory same-sex marriage” an assault on religious liberty.

One might ask you and the GOP why they are obsessed with gay sex Ted.
If you and your ilk worried more about the heterosexual divorce rate and why heterosexual parents toss their unwanted offspring into the welfare of strangers and state/governmental organizations, then maybe a sane person could understand where your coming from...actually we do understand, your all self indulgent assholes fixated on what gay people do in the privacy of their bedrooms.
We also know, that if it wasn't for our secular laws you and your kind would be worse than ISIS.
Posted by Ulf Raynor at 5:26 PM