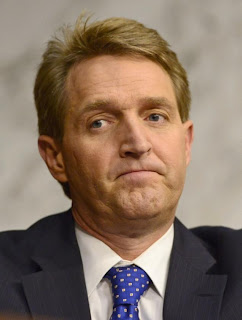 Republican Sen. Jeff Flake’s  high school–aged son Tanner used Twitter to threaten the “faggot” who stole his bike from church, that he “will find you, and … will beat the crap out of you,” joked about an acquaintance stealing one-liners because he’s Jewish, and went by the name “n1ggerkiller” in an online game.
“I’m very disappointed in my teenage son’s words, and I sincerely apologize for the insensitivity. This language is unacceptable, anywhere. Needless to say, I’ve already spoken with him about this, he has apologized, and I apologize as well,” Sen. Flake said in a statement to BuzzFeed.
Although Tanner has since locked his Twitter account, a series of tweets from January and February show the Arizona Republican’s son repeatedly using the slurs.
Additionally, Flake posted screenshots of scores from games on “Fun Run,” a social gaming app. The screenshots show that Flake goes by the name of “n1ggerkiller.”
A source points out that Flake’s YouTube comments are also littered with offensive language. A preliminary review of the hundreds of comments shows he repeatedly called other users “nigger” and “faggot,” called Mexicans the “scum of the Earth,” and on several occasions bragged that his father is a member of Congress.
Disappointed in his words?
One would think you'd be disappointed in his very thought processes..unless of course, this is normal part of his LDS religious upbringing and home environment.