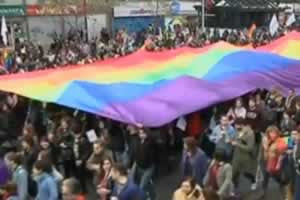 Thousands of people on Saturday marched in Chile's 13th annual Gay Pride parade.
Roughly 10,000 people – 40,000 according to organizers – braved the threat of rain to take to the streets of Santiago, Chile's capital.
The marchers carried a giant rainbow flag as they wound their way through the city to the Paseo Bulnes, where a cultural event was held.
“This demonstration is to demand the politicians put up high the things we are proposing from civil society, including gays, lesbians and transgendered people,” said Rolando Jimenez, president of the gay rights group Movimiento de Integracion y Liberacion Homosexual (Movilh). “To demand the government make urgent a Life Partner Agreement. To tell the presidential and parliamentary candidates that we want a marriage equality law.”
Chilean President Sebastian Pinera in 2011 sent to Congress a bill which seeks to legalize civil unions for gay and lesbian couples. Pinera's bill would allow gay and straight couples who have lived together for more than one year to enter a legal contract called the Life Partner Agreement (Acuerdo de Vida en Comun). But lawmakers have mostly ignored the proposal and activists have criticized it.
Former Chilean president Michelle Bachelet, who is campaigning to replace Pinera, has endorsed marriage equality.
Posted by Ulf Raynor at 4:28 PM