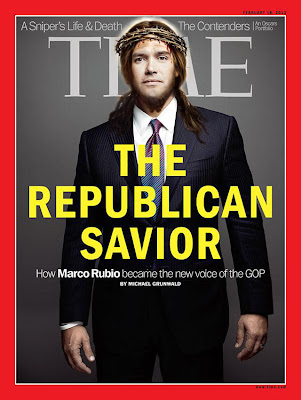 From The Huffpost:
Sen. Marco Rubio (R-Fla.) made another threat on Thursday to walk away from his own comprehensive immigration reform bill, this time over an amendment to provide the same immigration benefits to LGBT couples as heterosexual ones.
"If this bill has something in it that gives gay couples immigration rights and so forth, it kills the bill. I'm done," Rubio said on the Andrea Tantaros Show. "I'm off it, and I've said that repeatedly. I don't think that's going to happen and it shouldn't happen. This is already a difficult enough issue as it is."
It's likely not a reason to worry about the bill because a potential vote on such an amendment would almost certainly fail. An amendment from Sen. Patrick Leahy (D-Vt.) would allow same-sex married couples to petition for green cards for foreign-born spouses in the same way heterosexual married couples can, which currently is banned because of the Defense of Marriage Act. The status quo means many same-sex couples are either forced to live apart or to leave the country to be together, but could be rectified if the Supreme Court overturns the DOMA.
Rubio has repeatedly said he opposes adding LGBT provisions to the immigration bill he drafted with the so-called "gang of eight." His fellow Republican members of the group are similarly opposed and insist it would be a poison pill to the immigration reform legislation.
"If you're going to load it up with social issues, that is the best way to derail it, in my view," Sen. John McCain (R-Ariz.) said in January.
Democrats seem to be taking Republicans at their word, and even if the amendment comes up for a vote, most advocates have resigned themselves to the likelihood it will fail. Leahy even withdrew the amendment from a vote during the Judiciary Committee hearing in May, at the urging of Democrats in the gang of eight.
Rubio has also said he would vote against his bill if border security provisions are not strengthened.
Posted by Ulf Raynor at 6:05 PM