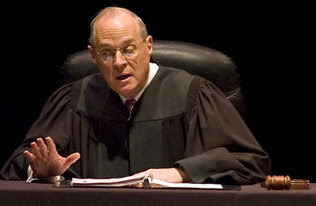 Supreme Court Justice Anthony Kennedy on Sunday denied a request by supporters of Proposition 8 to halt the weddings of gay and lesbian couples taking place in California.
Attorneys filed the emergency motion on Saturday after the Ninth Circuit Court of Appeals on Friday lifted a stay on a lower court's ruling declaring Proposition 8 unconstitutional. The appeals court acted two days after the Supreme Court ruled that interveners in the case did not have legal standing to defend the law. Within hours of removing the hold, the two couples who had in 2009 filed the case were married.
“Failing to correct the appellate court's actions threatens to undermine the public's confidence in its legal system,” lawyers for ProtectMarriage.com, the sponsors of Proposition 8, said in their filing.
Lawyers argued that marriages should not have been allowed to resume because the high court had yet to issue its “final disposition” in the case. A case is finalized 25 days after it is rendered to allow time for an appeal.
According to ABC News, Justice Kennedy has jurisdiction over the Ninth Circuit and the authority to act alone in such matters.