Asshole Of The Week Goes To... 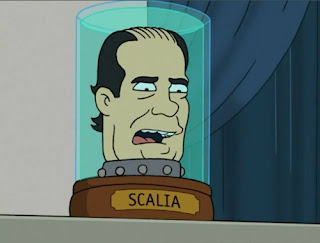 Anton Scalia: "Court should not rule on ‘moral’ issues like equal marriage."


The US Supreme Court failed to announce its opinion on two key equal marriage cases on Thursday, and is now expected to do so on Monday, which is the last scheduled date to make a decision.
The court could rule on Proposition 8, California’s state-wide ban on equal marriage, and the Defense of Marriage Act, which federally bans same-sex married couples from benefits afforded to opposite-sex marriage couples.
Justice Anton Scalia made the comments in a speech in North Carolina on Friday, during which he said the court should not be ruling on “moral issues”, where there is no “scientifically demonstrable right answer.”
As well as equal marriage, Justice Scalia said the court should not make rulings on the death penalty or physician-assisted suicide.
He went on to say that the “judge moralist”, who decides on such issues threatens the US Constitution.
Despite being officially banned from discussing current cases before the Supreme Court at the North Carolina Bar Association meeting, Justice Scalia still used the speech to make hints that he may not be in favour of striking down Prop 8 and DOMA.
“In the United States, and indeed throughout the world, belief in the expert has been replaced by the judge moralist,” he said, reports to the Asheville Citizen-Times. “We have become addicted to abstract moralizing.
“I accept for the sake of argument, for example, that sexual orgies eliminate social tensions and ought to be encouraged. Rather, I am questioning the propriety, the sanity of having a value-laden decision such as this made for the entire society by unelected judges.”
Scalia’s suggested position on these issues has not come as a shock to critics.
The Supreme Court does not announce which decisions it will announce ahead of time. Monday 24th June remains on the calendar as the final day on which the court could announce a decision. It could however, add extra decision days after Monday.
I think we can take heart in the knowledge that a homophobic religious bigot like Scalia obviously see's the court making just such a judgement.
If your argument is solely based on a:  “Scientifically demonstrable right answer.” to a moral issue, then on what does the court base upholding the articles of the first amendment?
How do YOU Anton, scientifically demonstrate a right answer when the sole basis for argument is because the Bible says so and God hates fags?
A first grader could make more valid constitutional assertions than you do.

Should Catholics (such as Scalia)have equal rights? Or should this moral issue be left to a vote of the people? Should slavery be legal? Or should this moral issue be left to individual states' rights or a vote of the people? When a supreme court judge has lost his own moral compass, should he be allowed to serve out his term (for life), or should he be removed from office by a vote of the people? Is the United States Constitution "dead", as Scalia says, or is it a "living document"? If it's dead, then how did corporations recently become "people" and the right to bear arms in the 2nd amendment morph from "for a militia" to an individual right? Scalia is the longest serving supreme court judge currently on the court - it's time for him to go.

Funny you should mention it Ted, but in many states and communities, Catholics weren't allowed to vote.
Deprived of that right because it was feared they would force their religion on *decent* Christian people.
That is, until the Supreme Court ruled against such actions.
Scalia is a redneck dipshit with delusions of grandeur... you can see the self righteous smugness written on every cavernous crevice of his face.