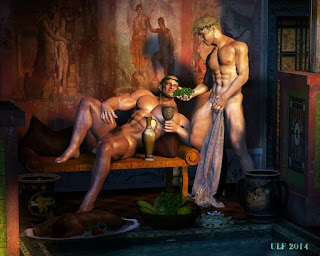 By Kevin Childs:
Midwinter; fires are crackling, the home smells sharp of evergreen, candles flicker, glass glitters, the table sags. Drink flows like rivers and you and your partner snuggle up on a couch to shag and booze the holiday away.
But this isn’t Christmas: it’s Saturnalia, the ancient Roman festival dedicated to the fertility god Saturn around the first century BC. And it’s the true origin of Christmas.

What a queer festival it was. Sources mention lads running naked about the place, cross-dressing for dinner, tops becoming bottoms, masters waiting on their servants (just for a day, mind), sausages, wine, cunnilingus and fruitcake.
There’s less solid historical information about lesbians and trans men, sadly, but of course they would have been there.
As most good things come in gay packages, most of our traditions, from Christmas trees to Christmas presents, are rip-offs of gay pagan solstice celebrations.
December 25th, this was the day the Sun was reborn and so was sacred to the deity Sol Invictus, the Unconquerable Sun. He was a beefcake of a god, popularised around 220AD by that great same-sex, selfish, cross-dressing, proto-transgendered Emperor, Elagabalus.
The beautiful young Elagabalus loved a good party. His dancing during the midwinter festival wowed the Roman legions into declaring him emperor. He shimmied his way to power.
But his Saturnalian practical jokes could go too far. One group of banqueting guests were literally suffocated by the weight of violets dropped through a false ceiling. Others might wake from a drunken debauch to find a pet tiger sniffing their crotch.
Roll reversal isn’t just for Saturnalia though: Elagabalus said he was ‘delighted to be called the mistress, the wife, the Queen of Hierocles,’ his lover who was a charioteer.
Not surprisingly, his reign lasted less than four years but Sol Invictus became a favourite of the Roman people.
Even Saint Augustine (of whom more below) later admitted its importance, saying Christ’s birthday replaced that of the Sun.
Everyone loves presents, and so did the Romans during the Saturnalia. They gave statuettes of beautiful youths and ‘hermaphrodites’, phallic cakes, books of filthy epigrams, cosmetics and hair extensions for either sex.
Not just statues, either, but real life slave youths and hermaphrodites would be given.
The Christmas tradition wrongly insists the first gifts were brought by the Magi. But even this Bible myth may have a real queer history.
In 63 CE Tiridates of Armenia came to Rome with his entourage of Magi to end a drawn-out war and do homage to the Emperor Nero, that great bisexual showman of Roman history.
They gave gifts, the wise men made their predictions and Nero sang some early version of Three Coins in a Fountain.
He extravagantly kissed handsome Tiridates to seal the bargain. And he closed the doors of the temple of Janus, the two faced god who represents beginnings and endings, including New Year and January, to symbolize peace on earth.

Not long after, someone remembered this: and the three Magi and their kingly gifts made their first and only appearance in Matthew’s Gospel doing homage to the ruler of the earth.
Greenery was used to decorate the house during midwinter festivals from ancient Rome to Tudor England’s Yuletide in the 1500s.
Christmas trees are an invention of the pagan North: a symbol of rebirth or, according to one tradition, a Christian replacement for the pagan oak in the spiritual lives of the ancient Germans.
But the best story about the first Christmas tree is surely this:
Long ago a young count of Luxembourg called Otto was famous for spurning all the young women of the neighbourhood. He preferred the company of his male friends and ‘manly’ pursuits.

Like all young men who reject the charms of comely maidens, one Christmas Eve he fell for a fairy who, in return, gave him a wondrous tree all decked out with silver lights and shiny baubles. It was quite the campiest thing he’d ever seen, and from then on his heart belonged to those creatures who are neither one thing nor the other.
Kissing under the mistletoe, has even queerer credentials, almost lost in the mists of the ancient lands it came from.
In Iron Age Britain, Ireland and Gaul, Druids were the ‘professional classes’ and religious leaders. One of their jobs was to gather mistletoe at the winter Solstice.
Many Druids were also gay, their otherness singling them out as special and holy. All good until that ‘otherness’ meant they were called on to sacrifice themselves to save the tribe in times of war or want.
If that happened, they’d eat mistletoe berries, the juice of which was thought to be gods’ semen.

Do NOT try this at home. Mistletoe is also poisonous.
Saturnalia was an enormous feast. Masters would serve their slaves, as all were equal in the golden age of Saturn’s reign.
The well-healed were supposed to let their less wealthy neighbours gorge at their tables, but as Lucian, a second century satirist, complains they could be as tight-fisted as Scrooge. His revenge was to pray all their fine clothes be eaten by mice and their pretty boyfriends’ hair fall out.
To avoid this, gay Emperor Hadrian preserved his lover’s locks by insisting on sampling all the trimmings from all the tables at dinners he hosted.
Saturnalian dinners were just a prelude to something even better than a feast…

As the first century Roman poet, Martial says: ‘give me kisses, boy, wet with wine/… if on top you’ll add a fuck, Jove couldn’t be happier with his Ganymede than I am with mine.’
There’s nothing ancient about Jesus in his crib. The first Nativity scene was a piece of live theatre organised by Saint Francis in 1223.
As he moved ox and sheep and Virgin around to strike the perfect tableau, one of the people watching was Elias, the man Francis had loved since boyhood.
Francis spent all his time with Elias, sharing intimate secrets, calling him ‘Mother’. In a sweet slip of the quill, Elias even confessed he knew Francis’ body intimately.

He was present at all the turning points in Francis’ life and death, but later biographers wrote him out of the story.
St Augustine didn’t write the first one but he is credited with popularizing the festival in the late fourth century, through sermons reminding Christians that on this day ‘God became man’.
Augustine wrote some pretty vile stuff about gay people too, but then he had the zeal of a convert. In his youth he loved a boy his age so violently and passionately and physically, he was devastated when the young man died. He turned to religion.
The ghosts of Christmas present owe a lot to those of Christmas past. The great tradition of tolerance and warmth that Christmas borrowed from gay Roman Saturnalia is with us still.
Jesus is a god of love, even if some of his followers forget that.
As the pagans in the fourth century fought to preserve their ways and festivals, one of them made an eloquent plea to a Christian Emperor. It serves just as well for a Christmas message:
‘We gaze up at the same stars; the sky covers us all; the same universe encompasses us. Does it matter what practical system we adopt in our search for the Truth? The heart of so great a mystery cannot be reached by following one road only.’

Very well done. Thanks Ulf for including it on your site.