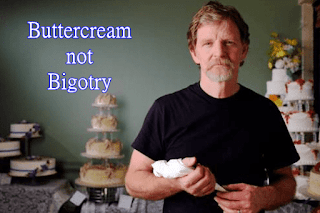 A Trump official has told the US Supreme court Business should free to hang ‘no gay couples’ signs.
His words came in landmark United States Supreme Court’s Masterpiece Cakeshop v. Colorado Civil Rights Commission case.
President Donald Trump’s Solicitor General Noel Francisco told the Supreme Court:
‘This case raises an important issue for a small group of individuals; namely, whether the state may compel business owners, including professional artists, to engage in speech in connection with an expressive event like a marriage celebration to which they’re deeply opposed.’
Justice Anthony Kennedy, who will likely be the swing vote in the case, pushed Francisco for clarification. Asking whether the Solicitor General thinks a business can put a sign up saying: ‘We don’t bake cakes for gay weddings.’

Francisco answers: ‘yes, as long as the cakes are custom made.’
The case is important because it will provide a critical decision regarding matters of discrimination. But also, on the First Amendment in a much broader scope.
Moreover, if the vote goes the Trump administration’s way, it could give those fighting for religious freedoms a legal precedent.
It comes after Jack Phillips of Masterpiece, refused to make a wedding cake for gay couple Charlie Craig and David Mullins.
But, Colorado has an anti-discrimination law in place for public businesses.
This means it was illegal for the baker to refuse on the basis of sexuality. Indeed, the law also covers discrimination based on religion, disability, race, creed, color, sex, age, national origin or ancestry.

Now, the justices will decide if this violate Phillips’ First Amendment right to freedom of expression.
At the start of September, the Trump administration took Phillips’ side.
And now, they are doubling down on this stance. Unsurprisingly, this is upsetting many advocacy groups.
As the Masterpiece Cakeshop case gets underway at the US Supreme Court, those advocates are biting back.
Human rights organizations across the board, from the ACLU, GLAAD and the Human Rights Campaign are protesting in support of the married couple.
HRC President Chad Griffin says: ‘At its core, this case is a cynical effort to manipulate the First Amendment.’
Adding, ‘it is aiming to provide a license to discriminate against LGBTQ people and our families.’
Posted by Ulf Raynor at 5:29 PM

I understand the issues involved, but to be honest I would not want to buy or consume anything made by a bunch of bigoted straight fannyjacks