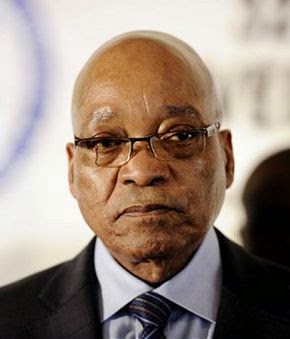 South African President Jacob Zuma said Tuesday that he respects Uganda’s right to pass legislation severely criminalizing LGBT people and their supporters in the latest sign that South Africa will not join with Western nations in taking formal action against the country.
‘South Africa respects the sovereign rights of other countries to adopt their own legislation,’ Zuma said in a statement in response to a question from a member of the National Assembly.
‘In this regard, through diplomatic channels South Africa engages with Uganda on areas of mutual concern bearing in mind Uganda's sovereignty.’
Uganda’s President Yoweri Museveni signed a bill into law in February making it a crime not to denounce known homosexuals to the authorities and the law jails repeat homosexual offenders for life.
The passage of the bill was condemned by South Africa’s Human Rights Commission which called on Zuma’s government to condemn the law.
‘The commission believes that our government should make its rejection of Uganda's draconian law clear and visible,’ spokesman Isaac Mangena said in February.
‘We should join those who respect the rights and freedoms of every person to call for the repeal of this and all similar legislation and to follow good human rights practices in line with its commitments under international and regional laws.’

Seems people like Zuma quickly forget their countries own abhorrent history of prejudice and oppression when they wish to perpetuate their own vile ideals and prejudices against a minority.
Those who will not learn from history are condemned to forever repeat it!
Posted by Ulf Raynor at 5:57 PM

Zuma is the fool who wants to pattern South Africa after the wonderful Robert Mugabe
("president for life" of Zimbabwe). Under Mugabe's rule there is not a vestige left of anything that can be called civil rights.