'Stone Cold' Steve Austin Tells It Like It Is! 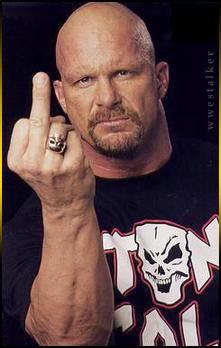 Retired professional wrestler “Stone Cold” Steve Austin has endorsed marriage equality while criticizing anti-gay Christians.
The 49-year-old Austin said in a podcast that he doesn't “give a shit about people's sexuality.”


“I believe that any human being in America, or any human being in the goddamn world, that wants to be married, and if it's same-sex, more power to 'em,” he said.
He also criticized churches which oppose marriage equality: “Which one of these motherfuckers talked to God, and God said that same-sex marriage is a no-can-do?”
“Okay, so two cats can't get married if they want to get married, but then a guy can go murder fourteen people, molest five kids, then go to fucking prison, and accept God and He's going to let him into heaven? After the fact that he did all that shit? See that's all horseshit to me. That don't jibe with me,” he added.
Posted by Ulf Raynor at 6:19 PM

love wrestlers they ´re so liberal and depraved
Ulf i think they fuck each other?
what do you think?

Eduardo, if not in reality, they definitely do in my fantasies!

More people come forward as they get fed up with hypochristian lies. More please. B