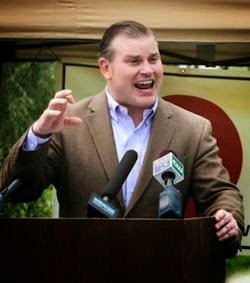 
Wolfson noted that 10 percent of the world's population has marriage equality, which he lauded as “tremendous progress.”
“And, of course, it also shows we have a long way to go. And part of the reason we have a long way to go is organizations like Mr. Brown's are going over to places like Russia to work with Putin and his team to pass viciously anti-gay … You went to Russia to foment, to foment …,” Wolfson said.
“This is a slur,” Brown interrupted “You made an absolutely false claim that I somehow worked with President Putin.”
“Were you in Russia?” Wolfson asked.
“I travel all around the world and of course I would go to Russia. … Of course supporters of marriage as the union of a man and a woman are going to work with our allies worldwide to stand up for this truth,” Brown responded.
“Mr. Brown was in Russia, people can go and look it up, for something called the World [Congress] of Families that endorsed a resolution calling on other countries to adopt the same kind of vicious, brutal, sweeping anti-gay law that Putin's Russia just enacted that has launched a wave of thuggery and beatings in the streets and discrimination against gay people in that country that is now seeking to export that kind of attack. That's not about marriage. That's about beating up and in some cases killing to death and licensing thuggery. Mr. Brown was a part of that conference and that's part of the work he is doing,” Wolfson said.
“Absolutely wrong,” Brown replied. “His facts are absolutely wrong. We have condemned violence all of the time. All people can look up are Evan Wolfson's and Human Rights Campaign's absolute lies and slurs.”
Last month's forum ended with an urgent appeal to the world to adopt Russian-style bans that prohibit the promotion of “gay propaganda” to minors. While it was widely reported that Brown and other U.S. social conservatives attended the conference, it's uncertain whether they signed onto the resolution.
Posted by Ulf Raynor at 5:19 PM