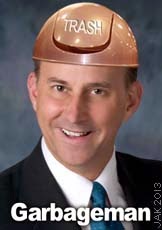 Outspoken anti-gay Republican congressman Louie Gohmert has used an appearance on the Point of View radio talk show to make a bizarre attack on gays and lesbians serving in the US military – claiming that they will not be battle ready in the event of a sudden attack.
Gohmert made the comments a day after the third anniversary of the end of the Don’t Ask, Don’t Tell policy that barred openly gay and lesbian personnel from serving, saying he still believes allowing them to serve ‘is not a good idea.’
Gohmert conceded that warriors in same-sex relationships had been successful on the battlefield in Ancient Greece but said America no longer fought those sorts of wars.
‘I've had people say, “Hey, you know, there's nothing wrong with gays in the military. Look at the Greeks,”’ Gohmert told host Kerby Anderson. ‘Well, you know, they did have people come along who they loved that was the same sex and would give them massages before they went into battle. But you know what, it's a different kind of fighting, it's a different kind of war and if you're sitting around getting massages all day ready to go into a big, planned battle, then you're not going to last very long. It's guerrilla fighting.
‘You are going to be ultimately vulnerable to terrorism and if that's what you start doing in the military like the Greeks did ... as people have said, “Louie, you have got to understand, you don't even know your history.” Oh yes I do. I know exactly.’ Gohmert did not explain why same-sex attracted soldiers would need more massages than their heterosexual colleagues.
Gohmert’s comments were uncovered by RightWingWatch.org – a project of the group People for the American Way.
Posted by Ulf Raynor at 5:13 PM

Dumb Fuck doesn't even begin to describe this useless piece of shit!

Well duh, guess Louie ain't the only one with a mental handicap.