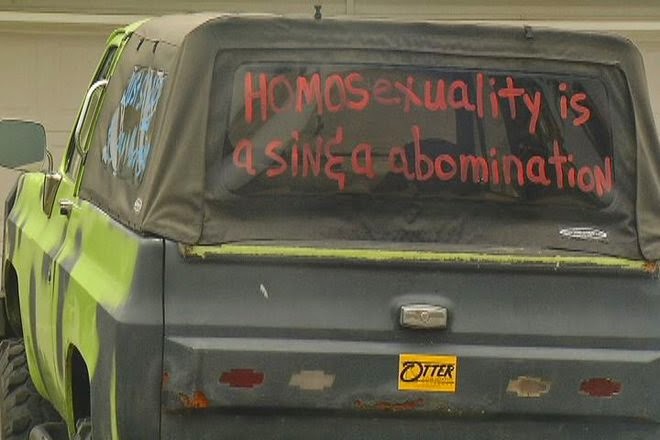 A couple in Idaho have launched a personal campaign against gay rights as gay and lesbian couples in the state began exchanging vows on Wednesday.
Justin and Melanie Sease of Meridian have taken their message to the streets of Meridian, the state's third largest city. The couple has added anti-gay messages to both their cars, including “Just say no to same-sex marriage,” “Homosexuality is a sin & a abomination in God's eyes” and “Lev 18:22.”


“We can never accept public homosexuality,” Justin Seal told KBOI 2News. “It's wrong. And it's wrong in God's eyes first. He's very clear in the Bible. The Bible says that when homosexuality is publicly accepted, basically it spreads like a cancer.”
“This is kind our little way of protesting the homosexual extremist movement,” he added.
Melanie said she's received lots of positive feedback: “Most everyone who has seen our vehicles gives us a thumbs up, waves, smiles or honks.”
Of course, many Christian denominations support marriage equality. In fact, it was a lawsuit filed by a church that struck down North Carolina's ban.

As a kid, I was raised by a very conservative, military, evangelical father.
The conundrum for my father, when he realized I was gay, was how he could reconcile what he believed the Bible said and his love for his gay son.
The biggest gun any Christian has is Leviticus 18:22.
I won't go into all the historical bullshit that implemented this law in the first place in scripture, but I will explain why it and all Levitical law (laws of Moses) do NOT apply to us or anyone else.
After many heated debates with my father of the historical aspects of this scripture and why it never came from God in the first place..it was these final scriptural revelations that finally won the argument and freed my fathers thinking on the subject and put him at peace. (Yes, guess all those summer vacations being forced to attend Bible schools payed off):
"As the Lord began to raise up Paul the apostle and use him mightily for His glory, this brought about many more Gentile conversions. This great influx of Gentile believers into the early church attracted much attention to the issue of the Mosaic Law’s relevance for the Christian. In Acts 15:1, we learn, "And certain men came down from Judea and taught the brethren, unless you are circumcised according to the custom of Moses, you cannot be saved." And Acts15:24 tells us that they were saying "you must be circumcised and keep the Law."It was determined that Paul and Barnabas should go up to Jerusalem to meet with the apostles and elders in order to settle this dispute. And it was here that the historic decision was made regarding the Christian’s relationship to the Law of Moses. Amid much debate and discussion, the apostle Peter asked regarding this matter: "Why do you test God by putting a yoke on the neck of the disciples which neither our fathers nor we were able to bear?" Acts 15:10. It was then revealed by the Holy Spirit that the Gentile believers were not obligated to keep the Law of Moses, but they, as well as the Jews, are saved through the grace of the Lord Jesus.It would seem at this point that the Law delivered by Moses to the Jews has no purpose whatsoever for the Christian and that it is altogether irrelevant. In Paul’s Epistle to the Galatians he addressed this issue extensively as this church was also coming under the influence of "those of the circumcision," who were also known as the "Judaizers."In the midst of his letter to the believers in Galatia, Paul proceeds to ask the following question: "What purpose then does the Law serve?" Galatians 3:19.Paul then goes on to answer this question; and while doing so, he makes the following statement:" . . . for if there had been a Law given which could have given life, truly righteousness would have been by the Law. But the Scripture has confined all under sin, that the promise by faith in Jesus Christ might be given to those who believe. But before faith came, we were kept under guard by the Law, kept for the faith which would afterward be revealed. Therefore the Law was our tutor to bring us to Christ that we might be justified by faith. But after faith has come, we are no longer under a tutor." Galatians 3:21."