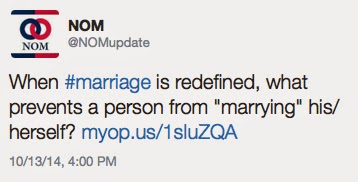 When Brian Brown, president of the National Organization for Marriage (NOM), on Monday asked whether marriage equality will lead to people marrying themselves, Twitter erupted in laughter.
“When #marriage is redefined, what prevents a person from 'marrying' his/herself?” Brown tweeted.


Brown's tweet promoted a NOM blog post commenting on a Guardian story about a woman who decided to marry herself. And although the marriage was not legal and the woman said she was open to “sharing” a wedding with another person, NOM saw it as a result of marriage equality.
“When marriage is devalued and its nature loosely defined, what prevents marriage norms – such as sexual complementary, monogamy, exclusivity, permanence, or even the idea that marriage requires two people – from being broken down as well?” NOM rhetorically asked.
Using the hashtag #WhenIMarryMyself, Twitter users responded with whimsical humor.
“WhenIMarryMyself I'm going to ask @briansbrown to walk me down the aisle and I'm going to legally compel @PeterLaBarbera to be flower girl,” gay rights activist Dan Savage messaged, referring to anti-gay activist Peter LaBarbera.
“My mother warned me about guys like me!” Robert Heuer tweeted.
“Oops I forgot to save myself for my wedding night,” Towleroad's Andy Towle messaged.
GoodAsYou.org's Jeremy Hooper added: “#WhenIMarryMyself I will finally fulfill the wishes of all of those anti-gay activists who wished I'd go f*** myself.”
Here's more from the Towleroad