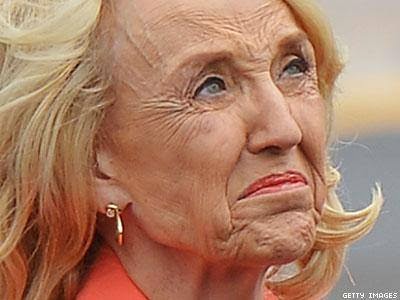 The courts have ruled Arizona homo's can now legally marry, thus thumbing their collective noses
at Christians and dowager Governor Jan Brewer. (Unless your Andrew Sullivan, whom I'm sure will be apologizing to the conservative religious radicals any minute now)
In a press release Brewer ranted that “the federal courts have again thwarted the will of the people” and eroded individual states’ rights.


"It is not only disappointing, but also deeply troubling, that unelected federal judges can dictate the laws of individual states, create rights based on their personal policy preferences and supplant the will of the people in an area traditionally left to the states for more than 200 years.
As Justice Scalia opined, such action is tantamount to ‘an assertion of judicial supremacy over the people’ and is an image of the judiciary ‘that would have been unrecognizable to those who wrote and ratified our national charter."

Brewer insisted that determining who can get married “is not the role of the judiciary.”
Perhaps she’s forgotten landmark cases like Loving v. Virginia? Or maybe it’s just more convenient to ignore them.

I'm certain, all of us are sad we've brought this poor woman to tears.
Maybe she's just really sad because no one asked her to their wedding?
Quick, someone send this woman some wedding cake (not forcibly made by some martyred Christian baker)