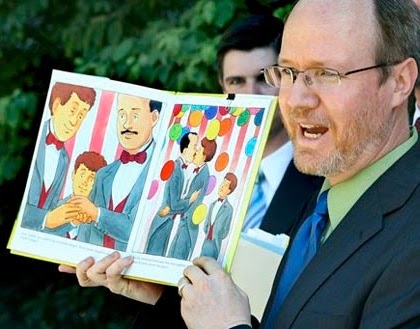 Christian conservative Randy Thomasson, president of Save California, is calling on governors to deploy the National Guard to stop gay couples from marrying.
In a memo to “pro-family leaders concerned about marriage” released last week, Thomasson called on “constitutional” governors to take the following steps: “Announce he took an oath to obey the constitution, not to obey a judge's unconstitutional opinion;” “Announce that no homosexual 'marriage' licenses will be issued, and no county clerk is permitted to issue marriage licenses to anyone other than a qualified man and woman;” and “Utilize the support of the state attorney general (if that constitutional officer is willing to stand alongside) or use the state's National Guard to enforce the law at county clerk's offices.”


In comments to WND.com, Thomasson said that the governors were ultimately responsible for enforcing the law.
“They're doing an appeal in Mississippi, but their attorney general there has said that these same-sex marriages will begin happening if their appeal to higher courts is not successful,” he said. “The governor [Phil Bryant] is supposed to be a strong Christian man, so what is he going to do? Is he really going to protect marriage? As governor, he's the head of the Mississippi National Guard. He can refuse to alter marriage certificates. He can threaten to sue county clerks for violating the state Constitution on man-woman marriage.”
Thomasson declared that governors who do not act are literally hurting children.
“It's worse than criminal, because criminals usually hurt one person at a time, but the governors, if they betray the people by their cowardice in the face of a constitutional crisis, then they hurt many people by being AWOL,” he said. “The casualties will be the children. These Republican governors, by their own actions, are telling impressionable boys and girls 'you can aspire to have a same-sex marriage for yourselves.”

Just goes to show you, how far we haven't come in this country, especially in the south, for equal rights, whether those be the rights of women, blacks or gays.
Here's just a reminder of Alabama Governor George Wallace standing in the doorway of the University of Alabama blocking two black students from entering back in 1963.
Wallace also threatened using the states National Guard to enforce his religion based racial hysteria.
Now we have another southern, religious conservative calling for the same thing against his perceived  notion of a gay menace. 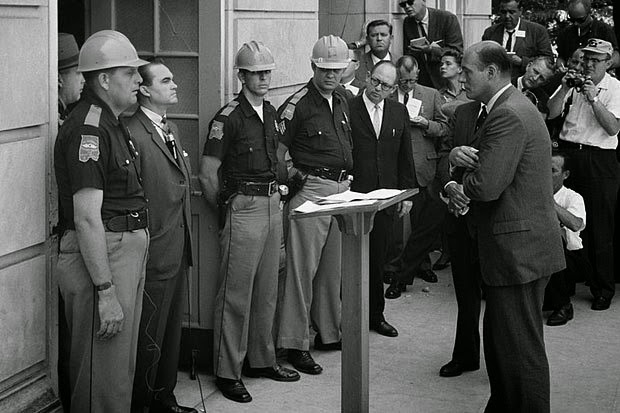 I’m not sure why this type of “ideas” get any press. By now, I’m sure he realizes that governments can’t stop gay couples from marrying on post / base, so I don’t know what he is up to beside a little rabble rousing.

Thanks for posting this, Ulf. I'm sharing it on my Facebook page!