Is This The Final Hurtle? 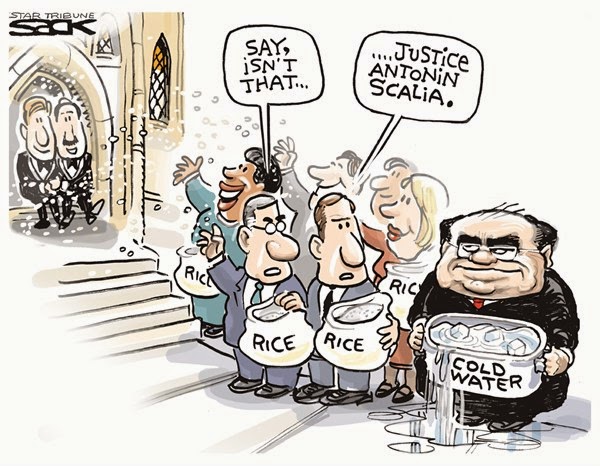 The Supreme Court on Friday agreed to hear appeals in cases challenging gay marriage bans in four states.
All four cases are out of the Sixth Circuit, the lone appeals court to uphold such bans since the high court struck down a key provision of the Defense of Marriage Act (DOMA) in June, 2013.


The Cincinnati, Ohio-based Sixth Circuit in November upheld bans in Michigan, Ohio, Kentucky and Tennessee.
Justices earlier this week declined to hear a fifth case challenging Louisiana's ban. A federal judge upheld the ban in September and an appeal is currently before the Fifth Circuit Court of Appeals in New Orleans.
The high court consolidated the four cases and limited arguments to two questions: “Does the Fourteenth Amendment require a state to license a marriage between two people of the same sex?” and “Does the Fourteenth Amendment require a state to recognize a marriage between two people of the same sex when their marriage was lawfully licensed and performed out-of-state?”
Evan Wolfson, president of Freedom to Marry, called the announcement the beginning of the last chapter in the fight for equal marriage rights.
“The Supreme Court's decision today begins what we hope will be the last chapter in our campaign to win marriage nationwide – and it's time,” said Wofson in a statement. “Freedom to Marry's national strategy has been to build a critical mass of marriage states and critical mass of support for ending marriage discrimination, and after a long journey and much debate, America is ready for the freedom to marry. But couples are still discriminated against in 14 states, and the patchwork of discrimination harms families and businesses throughout the country. We will keep working hard to underscore the urgency of the Supreme Court's bringing the country to national resolution, so that by June, all Americans share in the freedom to marry and our country stands on the right side of history.”
Oral arguments in the first question are limited to 90 minutes and to 60 minutes in the second question.
Briefing is to be completed by April 17.
Posted by Ulf Raynor at 5:06 PM