When The Student Becomes The Teacher 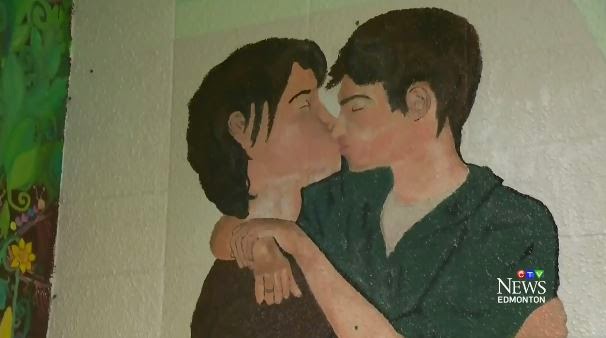 Kaela Wilton, a Grade 11 student in Onoway Canada, said she wanted to create a painting depicting a topic she’s passionate about.
“I wanted to do something controversial,” Wilton said. “I wanted to hit on a topic and gay rights is something I've always felt strongly about.”

Wilton, stated she felt shocked and betrayed after the school decided to cover her artwork up with a bulletin board, that she didn't understand why they would do that after she had submitted her idea to both her art teacher and the school principle and gotten approval.
The school’s principal, James Trodden, said the mural was covered for a number of reasons, but the main one is it displays affection.
“We had looked at that and said ‘You know, kissing isn't allowed in school’,” Trodden said. “So the painting was covered for about half a day.”
The board came down Friday, but Trodden said that isn't final – further discussion about the mural with students, parents, and the community will take place before a decision is made.
For any artist, this is the very definition of what art is about... to convey emotion, or elicit thoughtful contemplation, one way or the other...seems Kaela Wilton has accomplished that task more than the people chosen to instruct her.
Posted by Ulf Raynor at 6:24 PM