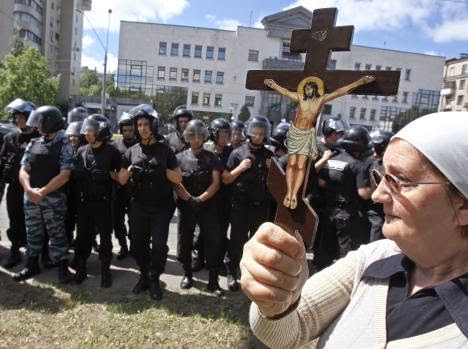 Ukraine's parliament has thrown out the Russian-style 'gay propaganda' bill.
The law is no longer on the agenda for the Ukraine's current session for the Verkhovna Rada, meaning it will not return for debate. In 2012, the parliament voted unanimously for a bill that would bring its law in line with Russia's homophobic policies.
Religious groups also collected tens of thousands of signatures calling on lawmakers to ensure children do not grow up seeing same-sex relationships as 'normal'. Over the last two years, the adopted bill was 'frozen' - not discussed, debated or voted on again, left in the fringes of parliament's agenda. But after the election in October, and a new constituted Verkhovna Rada, it appears that Ukraine now wants nothing to do with Russia - including its anti-gay policies. In parliament this week, deputies voted to call Russia an 'aggressor state'.
It happened on the basis of Article 95 of the Parliamentary Rules, stating the 'Verkhovna Rada may withdraw the bill from consideration if the bill has lost its relevance'. Svyatovslav Sheremet, a gay rights activist based in Ukraine, said: 'The idea that the country could use LGBT citizens must be extremely tempting for a number of the deputies. 'But now, with the understanding homophobia is linked to Russia and the "Russian world", such initiatives can hardly expect to succeed.'

Now don't go getting the idea that Ukraine's government is suddenly softening on anti-gay animus,
nope, just as homophobic as before, they just really hate Russia that much!
Posted by Ulf Raynor at 5:13 PM