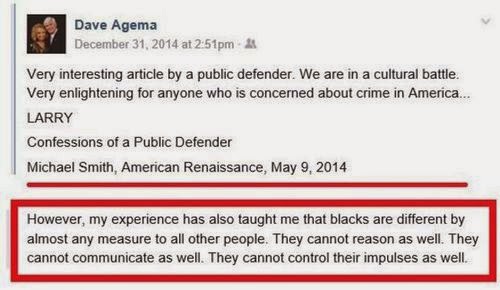 A Republican National Committee (RNC) panel has voted to censure Dave Agema, Michigan's GOP committeeman, and seek his resignation over a racist article he shared on Facebook.
Agema has courted controversy in the past with a string of anti-gay and anti-Muslim remarks.


Last year, he told a Republican audience that gays want free medical care because they are dying young, presumably from AIDS. He was severely criticized after he promoted an article which described gays as “filthy homosexuals” in a Facebook post.
Agema has so far resisted calls to step down.
RNC Chairman Reince Preibus on Wednesday said Agema's “history of harmful and offensive rhetoric” has no place in the Republican party.
In a recent Facebook post, Agema linked to an article that includes a public defender saying that blacks can't “control their impulses as well” as whites, the AP reported.
Agema has denied claims he's racist and insists he does not support the statement made in the article.
But, lets be clear here, they aren't censuring him for his anti-gay rants, just the racist ones.
So never fear, the RNC is still as anti-gay as it ever was and still has anti-gay rhetoric enshrined in the party platform.
Posted by Ulf Raynor at 6:11 PM