Art Or An Expression Of Hate? 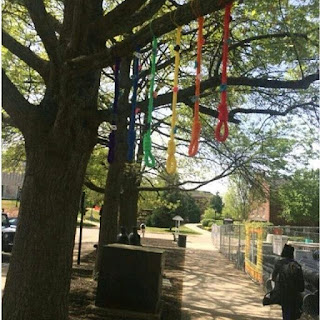 Police investigated after a group of rainbow colored nooses were discovered hanging from a tree on a college campus in Tennessee.
The six nooses were arranged like in rainbow colors at Austin Peay State University in Clarksville, leading some to worry it was a death threat to LGBT people or urging them to commit suicide. The noose is also a symbol of racial hatred in the US, especially in the south.
Thousands of blacks were lynched in a dozen states including Tennessee between 1877 and 1950
The FBI was notified in Nashville, and had begun investigating if a hate crime had taken place.

It turns out it was part of a ‘student art project’.


‘The police were very clear they didn’t understand if it was art or not art,’ said spokesperson Derek van der Merwe, explaining why the pieces were dismantled.
‘Based upon that it has to be viewed as a hate symbol and removed.’
In a statement from the university, the student, whose identity was not disclosed, said: ‘My intention with my sculpture project was to address the cycle of death and rebirth that is represented by the arrival of spring.
‘I had no social or political statements in mind. I did not take into consideration that nooses are a racially charged symbol, for that I am sorry.’
A professor in the art department approved the initial concept for the art, but expressed concerns about the project. The student mounted the project without final approval.
‘This incident is deeply disturbing and is hurtful to our university community,’ said university President Alisa White, according to Reuters. ‘I am saddened, and I am sorry for the hurt and offense this has caused.’
This is NOT an art project gone wrong, the student only apologized for any perceived racial slur NOT for the offense taken by the gay students it *definitely* offended.
The fact that neither the teacher or the student even bothered to attend a campus LGBT discussion on the sculpture, or offer any apology whatsoever to the LGBT students or community this project offended, is a clear indication of the pieces true intent.
Both teacher and student should be fully investigated for perpetrating a hate crime.

Seems to me the only problems here are lack of signage/interpretive material; and an obviously disingenuous explanation from the student (EVERYBODY in the US especially in the south understands both the implications of a noose hanging from a tree and the use of rainbow colors). Were the student who executed the project (pun intended) a gay person of color, it would have been seen in an entirely different light. The feelings seeing this piece arouse, paired with proper artist's statement could have made powerful points about southern history and the relationship between homophobia and racism as well as civil rights struggles for all. That was my first assumption when i saw the work. It also should perhaps not have been sited in a public place, but in a setting where people could choose to come and see it.

Without proper context and understanding, Ulf's work could be seen negatively and as abusive as well. People who come to this site simply know better.