Day By Day I Like Bernie More And More 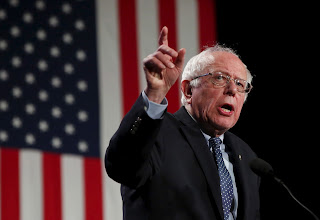 Appearing Friday on ABC's The View, Vermont Senator Bernie Sanders pledged to work to overturn state anti-gay bills if elected president.
When asked about passage of bills in North Carolina and Mississippi that target the LGBT community, Sanders vowed to repeal such laws.


“As president of the United States I would do everything I can to overturn these outrageous decisions by Mississippi, North Carolina, et cetera,” Sanders said.
“We have gone too far as a nation. God knows we have seen so much discrimination in our history, right? Against the African-American community. Against Latinos, against the Irish, the Italians, the Jews.”
“What we are trying to do is say, 'You have your political views, that's fine.' But I hope we remember what Dr. Martin Luther King, Jr. told us. And that is, you judge people on their character not on the color of their skin. And I would add too, not on their gender or their sexual orientation,” he added to applause from the audience.
Posted by Ulf Raynor at 3:51 PM