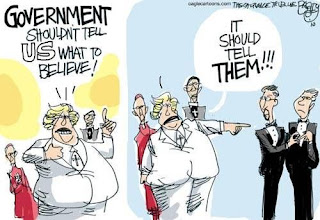 A Missouri House committee on Wednesday rejected a so-called religious freedom bill that sought to protect people opposed to the marriages of gay and lesbian couples.
Senate Joint Resolution No. 39 would have protected people such as clerks, clergy and businesses who didn't want to serve gay couples as it relates to their marriages.


According to the Associated Press, three Republicans joined three Democrats in voting against the measure, which cleared the Missouri Senate last month.
Democratic Governor Jay Nixon had condemned the proposal, saying it would “condone discrimination,” but Nixon's approval is not needed on constitutional amendments, which are placed before voters.
The Missouri Alliance for Freedom denounced the vote in a statement posted online: “We are not finished. While today's results are not optimal we are not going anywhere. Religious freedom is not negotiable.”
Posted by Ulf Raynor at 5:36 PM