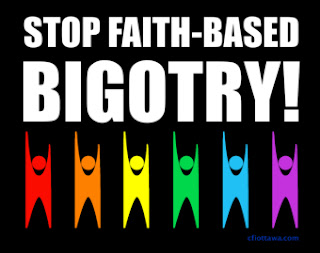 From Pink News:
Pope Francis has released a long-awaited report on ‘the family’ which affirms existing church teachings opposing gay equality and same-sex marriage.
It follows two Synods on the issue over the previous years, where proposals to water down church teachings were mooted but quickly disregarded.
In place of any changes to church doctrine on sexuality, the Pope’s report says that gay people should receive “assistance” to bring them back to normality, and affirms there are “absolutely no grounds” for considering recognition of “homosexual unions”.
The Catholic leader wrote: “In discussing the dignity and mission of the family, the Synod Fathers observed that, as for proposals to place unions between homosexual persons on the same level as marriage, there are absolutely no grounds for considering homosexual unions to be in any way similar or even remotely analogous to God’s plan for marriage and family.
Elsewhere, he rallied against “pressure” from outside influences calling for an end to homophobia.
He added: “It is unacceptable that local Churches should be subjected to pressure in this matter and that international bodies should make financial aid to poor countries dependent on the introduction of laws to establish ‘marriage’ between persons of the same sex.”
Though aid money is often curtailed in countries where gays are persecuted, jailed and subject to human rights abuses, the document references no proof whatsoever for the extraordinary claim that aid has been cut off over lack of same-sex marriage.
Such criteria which would presumably deem countries including Germany, Australia and Italy ineligible too.
Elsewhere, the Pope said the Church must be understanding of “families whose members include persons who experience same-sex attraction” – a term frequently used in ‘gay cure’ groups to pathologize homosexuality.
He claimed: “Such families should be given respectful pastoral guidance, so that those who manifest a homosexual orientation can receive the assistance they need to understand and fully carry out God’s will in their lives.”
Official church doctrine continues to teach that gay people are “disordered”.
Despite an early ‘who am I to judge’ PR blitz attempting to bolster his image, the Pope is yet to lift any of the actively homophobic and transphobic policies of his predecessors.
Proposals to ‘reach out’ to gay people were scrapped at last year’s Synod – and despite suggestions that the plans would return this year, it is clear that the Church has no plans to have another discussion surrounding the matter.
The Vatican has also maintained a silence after a report exposed that it was funding a ‘gay cure’ clinic for priests – and has not commented on reports that anti-gay hate groups are being funded by Catholic donors.
The Pope recently suggested that same-sex marriage is a ‘passing fad’.

Kudos to Pink news for being the only gay news site to even mention the fact the Pope called for a renewed effort on behalf of the church to cure all gay people of their homosexuality.
Not one other site even mentions this odious monsters plea for the further oppression and dehumanization of  the LGBT community.
I will never understand why the gay community still makes excuses for/ tries to gain acceptance from a religious cult bent on their complete eradication.