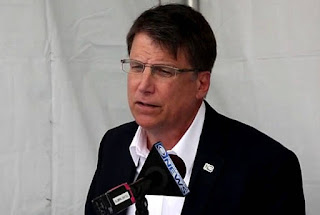 North Carolina Governor Pat McCrory today slightly softened his defiant stance in the face of immense backlash over his quick signing into law of HB2.
McCrory signed an executive order amending the new law which bans anti-discrimination protections for gay and transgender people.
The governor appeared via videotape to announce that the provision in the law that people must use bathrooms matching the gender on their birth certificate will still apply to schools and government buildings but ‘when possible encourages reasonable accommodations for families and those who have unique or special circumstances.’
He also said private businesses can decide their ‘own policy with regard to restrooms, locker rooms and/or shower facilities.’
IN addition, McCrory plans to ask the state legislature to reinstate the right for people to sue for discrimination in state courts and affirms the rights of the private sector and local governments to establish their own non-discrimination employment policies.
‘After listening to people’s feedback for the past several weeks on this issue, I have come to the conclusion that there is a great deal of misinformation, misinterpretation, confusion, a lot of passion and frankly, selective outrage and hypocrisy, especially against the great state of North Carolina,’ McCrory said.
But Lambda Legal, one of the LGTB groups fighting against the law, is not impressed with McCrory’s amendment and instead continues to call for a full repeal of HB2.
‘The devastating blow of HB2 will not be fixed by the band-aid of an executive order,’ said Lambda Legal Staff Attorney Kyle Palazzolo.
‘While this is an improvement for the state employees it impacts, HB2’s reach goes far beyond what the executive order addresses and that’s why we are challenging this extreme and discriminatory measure – in order to ensure that everyone who lives in and visits North Carolina is protected under the law.
‘HB2 is an attack on fairness in employment, education, and local governance that encourages discrimination against thousands of LGBT people who call North Carolina home, and it particularly targets transgender people.’
The measure was hurried through the house and senate last month after the city of Charlotte approved legislation that would allow transgender people to use public restrooms in fitting with their gender identity.
Before that law could take effect, HB2 was voted upon and passed by the GOP-led North Carolina House.
McCrory signed the bill later that same day (23 March), saying at the time that it was a matter of ‘common sense’. His executive order comes on the day that Deutsche Bank announced it was canceling plans for expansion in North Carolina specifically because of HB2.
‘We take our commitment to building inclusive work environments seriously,’ John Cryan, co-chief executive of Deutsche Bank, said in a statement.
PayPal announced last week that it had canceled an expansion in the state that would have brought 400 additional jobs.
Posted by Ulf Raynor at 5:13 PM