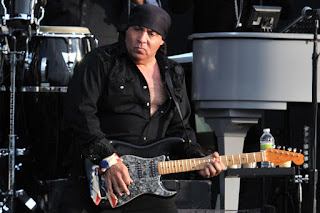 Steven Van Zandt, guitarist for Bruce Springsteen and the E Street Band, talked to the AP about the band's decision to cancel a concert in North Carolina in protest of a law that targets the LGBT community.
House Bill 2, approved last month during a one-day special session, blocks cities from enacting ordinances that prohibit discrimination based on sexual orientation or gender identity and bars students attending public institutions from using the bathroom that does not conform to their gender at birth.
The band was set to perform Sunday in Greensboro, but announced Friday that it would not perform in North Carolina as a show of support for “freedom fighters” working to overcome “these negative developments.”
Van Zandt told the AP that Springsteen and the band considered finding a middle ground.
“We always try to find a middle ground, and we considered it,” Van Zandt said. “Should we go there and make a statement from the stage? You consider those things, and then you realize that's just playing into their hands. That's not going to hurt enough – you need to hurt them economically.”
“This sort of thing is spreading like an evil virus around the country. We felt we better stop this, we should try and stop this early, and hopefully other people will rise up and join us.”


He added that he believes discrimination is anti-American. “As far as I'm concerned, it's anti-American discriminating against people. Whether it's women, whether it's gay, transgender, there's no difference. It was very important to us to take a stand early in this before it starts to spread all over the place,” he said.
Posted by Ulf Raynor at 5:04 PM