As you sow so shall you reap 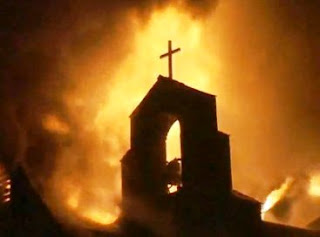 A California pastor who celebrated the deaths of 49 people in a gay nightclub in Orlando is being asked to move his church.
According to ABC affiliate WMAZ, Harsch Investment Properties, which owns the building where Verity Baptist Church is located, has asked pastor Roger Jimenez to move and has said that it will not renew the church's lease.


In the wake of the Orlando shooting, Jimenez praised the gunman for killing “50 pedophiles.” (Early reports were that 50 people died in the shooting.)
“Are you sad that 50 pedophiles were killed today?” he rhetorically asked his congregation. “I think Orlando, Florida is a little safer tonight. The tragedy is that more of them didn't die. The tragedy is I'm kind of upset he didn't finish the job.”
Harsch Investment Properties said in a press release that it would not tolerate “tenants who advocate hatred and the taking of innocent lives.”

How much ya wanna bet, this Sunday, he'll be preachin' how Christianity is under attack and how they are being persecuted just for being Christians (not of course because they are all hateful, evil twisted bigots)