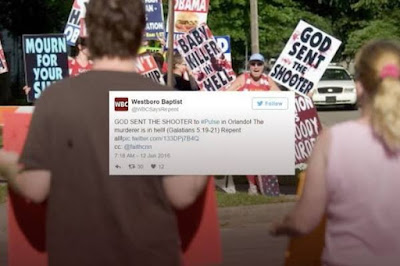 A human chain of love was formed in Orlando to thwart the hate of the Westboro Baptist Church, protecting the funerals of massacre victims.
49 people were killed and 53 injured in the shocking terrorist hate crime attack over the weekend,which saw a gunman open fire inside The Pulse gay bar in Orlando, Florida.

With over 100 people dead or injured, it stands at the largest-scale shooting in US history.
Funerals are beginning to take place in Orlando, and members of anti-LGBT hate group the Westboro Baptist Church have traveled to Orlando with the intention of protesting as many funerals as possible with ‘God Hates Fags’ signs.
However, hundreds of local residents are trying to thwart the group – turning up ahead of Westboro and forming a human chain around the memorial locations, to ensure that the families and friends of those who died can mourn in peace.
The ‘human chain’ group is coordinating on Facebook to ensure that all of the local funeral locations remain bigot-free.

Westboro had attempted to protest the funeral of victim Javier Jorge-Reyes yesterday, but were blocked from the event.
One of the mourners wrote: “I wanted to write a big THANK YOU! Yesterday, I attended my friend Javier Jorge-Reyes memorial.
“You all did an amazing job of blocking the hate out of the service.
“All of us inside were at ease and some didn’t even know there were haters out there because of all the love that was blocking the protesters.
“So thank you, we actually felt safe!!!”
One coordinator said they would keep up the shields, adding: “Westboro is going to wait until it is most feasible for them to strike.
“The number of services we are having makes it easier for them to wait until we are out of steam or target an event with fewer of us.”
Posted by Ulf Raynor at 4:01 PM