Two US marines under investigation for making 'threat' to gay bars 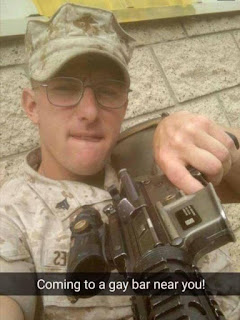 Two active-duty US marines are under investigating after posting a picture on social media appearing to threaten gay bars.
This followed Sunday’s massacre of 49 LGBT people and injuring 53 in Orlando, Florida. This was the largest homophobic massacre in recent memory, the worst terrorist attack since 9/11 and the most fatal mass shooting in US history.
California-based Marine Expeditionary Force after a photo surfaced on Facebook of a corporal in uniform holding a rifle with his finger near the trigger.
On the bottom of the photo, it read: ‘Coming to a gay bar near you!’
The picture was posted to Camp MENdleton resale, a private Facebook group for male Marines. The person who appeared to post it wrote: ‘Too soon?’
First Lt. Thomas Gray, a spokesman for I MEF, told Marine Corps Times that the command has identified the Marine in the picture and the one who posted it on Facebook.
‘We cannot discuss details of an ongoing investigation, but I can tell you the command is taking this incident seriously,’ Gray said.
Marine officials will be taking ‘appropriate action’ in response to the social media post.
‘The Marine Corps does not tolerate discrimination based on sexual orientation, race, gender or religion,’ the statement says..
‘This type of behavior and mindset will not be allowed, and it is not consistent with the Corps values of honor, courage and commitment that are demonstrated by the vast majority of Marines on a daily basis.’

As someone who grew up around Marines and is partnered with a Marine, I think I can safely say, that though I doubt either will be discharged, I can say, with certainty, they will wish they'd been discharged.
Marines are sworn to protect all US citizens, and posting something like this, while surely a very poor choice in judgement joke, will find that Marine Corps command won't be laughing.
Posted by Ulf Raynor at 6:35 PM