No Cake For Homo's 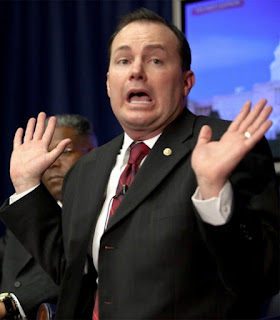 A House committee will consider a proposed “religious freedom” bill that seeks to protect individuals opposed to marriage rights for gay and lesbian couples.
Introduced June 17, 2015 by Republican Senators Mike Lee of Utah and Paul Labrador of Idaho, the First Amendment Defense Act (FADA) seeks to bar federal “discriminatory action” against those who oppose such unions based on a “religious belief or moral conviction.”


“The Federal Government shall not take any discriminatory action against a person, wholly or partially on the basis that such person believes or acts in a religious belief or moral conviction that marriage is or should be recognized as the union of one man and one woman, or that sexual relations are properly reserved to such a marriage,” the bill states.
According to the Washington Blade, the House Committee on Oversight & Government has scheduled a hearing on the bill amid pressure from Christian conservative groups opposed to marriage equality, including the National Organization for Marriage (NOM).
Out Rep. David Cicilline of Rhode Island denounced the move, calling it an “election year stunt to rally conservatives at the expense of LGBT Americans.”
A Hill staffer told the Blade that the hearing will take place July 12, the one-month anniversary of a mass shooting at a gay nightclub in Orlando that left 49 dead and injured dozens.
The American Principles Project and NOM are among the groups pressuring Republicans to move on the legislation.

What a waste of time and money. As if this putrid law won't be overturned in the courts.