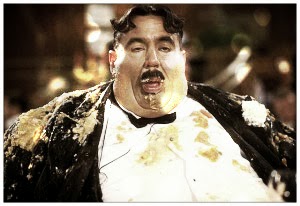 
“You know, one of the real ironies of this proclamation is the president here cites the need for more funding for HIV/AIDS,” AFA President Tim Wildmon says between sips of coffee. “But, unlike Michelle Obama, who advocates that children stay off the sodas, he doesn't advocate behavior change when it comes to homosexual behavior affecting your health.”
“Abe, why doesn't he say, 'Stop doing what you're doing and you won't get AIDS?'” Wildmon rhetorically asked Abe Hamilton, a public policy analyst with the group.
“I think once again you highlight one of the glaring episodes of hypocrisy that comes from secular progressivism as applied to public policy,” Hamilton responded. “In terms of other health areas, well, you need to get exercise, you need to cut the sugars, you need to not eat sodas. But in terms of homosexuality, there’s no adjustment needed in your behavior. We just need to pour more money into treating the results of the behavior.”
(Of course, HIV/AIDS awareness campaigns encourage safe sex practices.)
“Even though it's very provable that engaging in homosexual activity is dangerous to your health, in the same way that smoking is, or sugar, too much sugar, or anything of that nature,” Wildmon added.
Ed Vitagliano, the AFA's executive vice president, took issue with president's support for LGBT workplace protections. “The only [people] I know [who] are getting fired in this country in 2016 are Christians, because they oppose that proclamation and the ideas behind it.”

Yet amazingly, none of these overweight, bigoted blowhards mention one word about the number one preventable health risk in the world, obesity.
These poster bois for diabetes and heart disease (the two biggest preventable heath risk known to mankind) love pointing out other peoples problems but fail fundamentally and morally just by being what they are, middle-aged overweight judgmental bigots.
Just think of the billions of dollars this world could save in health care cost, if we could get assholes like these to get some exercise and push away from the table now and then.
Posted by Ulf Raynor at 5:04 PM