Young Marine Risked His Life To Help Save 70+ Pulse Patrons 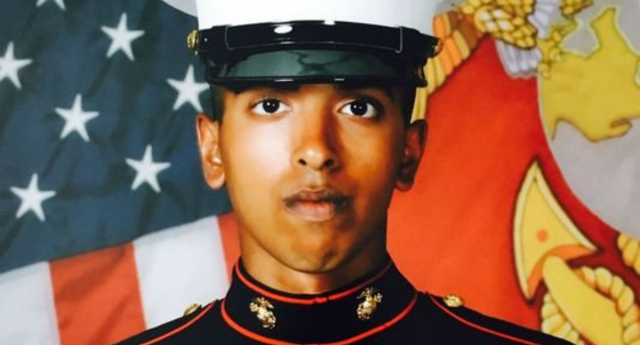 From Pink News:
A former US Marine saved dozens of lives during last weekend’s Orlando shooting after he recognized the sound of ‘high-caliber’ gunfire inside the venue.
However, due to the quick thinking of Pulse bouncer Imran Yousuf, around 70 clubbers were saved from Omar Mateen’s horrific attack.
Yousuf – who left the Marine Corps two months ago – described how “everyone froze” when the first shots were fired.
“The initial one was three or four (shots). That was a shock,” he explained, during an emotional interview with CBS News.
“Everyone froze. I’m here in the back and I saw people start pouring into the back hallway, and they just sardine pack everyone.”
As clubbers piled into the staff corridor – which he had entered only moments before the attack started – Yousuf said he decided to “take a chance” and try and open a door leading into the street.
“And I’m screaming ‘Open the door! Open the door!’ And no one is moving because they are scared,” he explained.
“There was only one choice. Either we all stay there and we all die, or I could take the chance, and I jumped over to open that latch and we got everyone that we [could] out of there.”
Asked how many people he thought he had helped escape, he said: “Probably over 60, 70. As soon as people found that door was open they kept pouring out and after that we just ran.”
Despite his heroic efforts, Yousuf said that he wishes he could have done more.
“I wish I could have saved more to be honest. There are a lot of people that are dead – there are a lot of people that are dead.”
In a now-deleted Facebook post, the former marine said he “just reacted” when he heard the gunfire.
“There are a lot of people naming me a hero and as a former marine and Afghan veteran I honestly believe I reacted by instinct,” he wrote.
“I have lost a few of my friends that night which I am just finding out about right now and while it might seem that my actions are heroic I decided that the others around me needed to be saved as well and so I just reacted.”
Earlier today, Yousuf’s employer Barbara Poma said she would re-open Pulse, saying she refused to “let hate win.”
Posted by Ulf Raynor at 3:03 PM