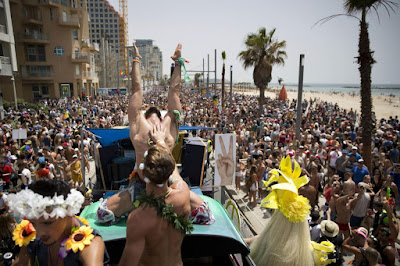 Some 200,000 people attended Friday's annual Tel Aviv LGBT Pride parade.
According to the Jerusalem Post, the march, which stepped off from Tel Aviv's Gan Meir park at noon, is the largest such parade in the Middle East.


Ron Huldai, mayor of Tel Aviv-Yafo municipality, praised this week's LGBT events.
“The Pride Parade has turned into one of the symbols of the City of Tel Aviv with hundreds of thousands of participants and tourists from all over the country and world,” he is quoted as saying.
“I believe that Tel Aviv-Yafo, a city of tolerance, is a beacon to other cities [on] this issue,” Huldai added.
A poll conducted ahead of Friday's Tel Aviv LGBT Pride parade found support for marriage equality in Israel at an all-time high. Seventy-six percent of the Jewish Israeli public supports recognizing gay and lesbian couples with some form of marriage, a 12 percent increase since September. 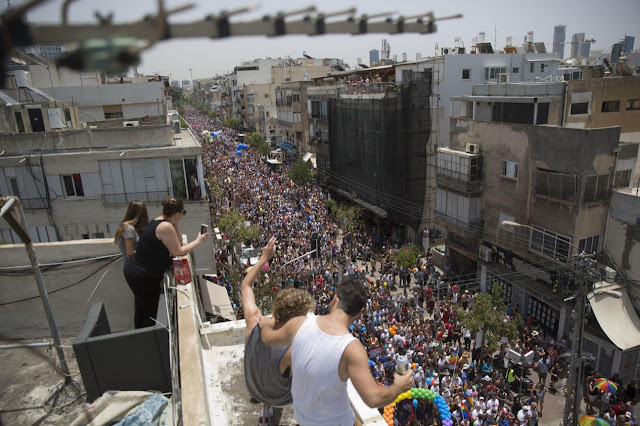 "...the largest such parade in the Middle East." Duh, where ELSE in the Middle East do they have such a parade? You do know that many Muslim Arabs from Jordan flee to Israel to avoid being butchered or stoned to death. Imagine, if you were bombarded DAILY w Israeli Jews being pictured in Arab editorial cartoons as dogs, monkeys, pigs (all considered dirty, despised animals in Islam) & propaganda that everything wrong in their Arab countries -in the world! -is because of Jews -their mere EXISTence! -no matter where in the world those Jews live, & other such racist nonsense, & still they flee to Israel in order to evade being beaten to death. As far as Israel being "racist" -20% of the population there IS Arab! Arabs are in the Israeli parliament representing their Arab constituents. No, sure, Arabs don't serve in the military -the Jews know a small % would do so conscientiously, but how to separate those from Arabs who'd use the chance to blow themselves up -killing their fellow soldiers -under the influence of Muslim hate teachings.

That so many in the West think that Israel should make "peace" with a group of people who want to exterminate/annihilate them, indeed Jews all over the world, wherever those Jews live! is downright disgusting. If YOU want to commit suicide, it's a free country here; just don't invite a whole country -Israel -of over 8 mil to do that! (Jews there nearing that 6 mil mark -again!) You do know that Muhammad told his followers that if they were weak, let those Muslims say they want peace, but when they get an army strong enough, fall on your so-called enemies & slaughter them. For examp, you're an enemy of Islam if you don't want Sharia to become the law of your (non-Islamic) country.
Any gay defender of the teachings of Islam -when Islam gets control of your country, you'll be some of the very first to be exterminated -whether you're Christian or atheist. What exactly don't you understand by the use of the words annihilate or exterminate?