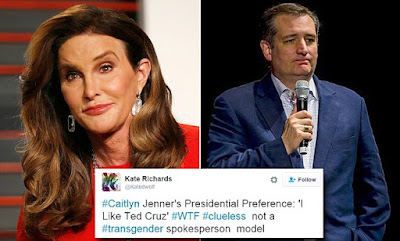 Republican Caitlyn Jenner is not among those ridiculing Donald Trump’s recent claims that he would be better for the LGBTI community than rival Hillary Clinton.
‘ … Trump seems to be very much for women. He seems very much behind the LGBT community because of what happened in North Carolina with the bathroom issue. He backed the LGBT community,’ the transgender reality star tells Stat.
But the three-times married Trump has said he is against same-sex marriage and has said that, if elected president, he would appoint a justice to the US Supreme Court who would vote in favor of overturning last year’s landmark ruling that brought marriage equality to all 50 states.
Trump, the presumptive Republican nominee, was also critical of the Obama administration last month for issuing directives calling on public school districts to let transgender students use bathrooms matching their gender identity.
On the most recent season of her reality show I Am Cait, Jenner was seen calling Clinton ‘ fucking liar’ and minimizing her accomplishments as Secretary of State and as US senator.
Jenner, 66, does acknowledge that Clinton is not a wild card when it comes to LGBTI issues.
‘ … In Trump’s case, there’s a lot more unknowns,’ she says. ‘With Hillary, you pretty much know what you’re gonna get with the LGBT community.’
Posted by Ulf Raynor at 5:52 PM

This fuck-head does not know whether he's coming or going. I mean she is seriously twisted and I don't know why she's not in jail for manslaughter. Was she exonerated for the car accident and I missed it? A little discretion among this clan Kardashian would not go amiss--but I'm old school and I don't need to get the tweet when somebody is going to take a shit or pee. Caitlyn Jenner sucks as a person regardless of gender because anybody who needs a camera or camera crew following them around for most of their lives
to make them feel like they are alive are not really alive they are just performing -Lights-camera-action. Most actors without a camera or script are shits in real life-they teeter on the edge of instability,insecurity and toxicity for any normal person who comes in contact with them. Naming names --Tom Cruise,Halle Berry, Ben Affleck even Robin Williams..and that juvenile Bieber and Trump Trump Trump an actor from a non-reality (the Apprentice was mostly scripted/formatted) show who read in some script that he should be a presidential candidate only the last half of the script he did not get--now he's improvising and his rudeness and nastiness are being accepted by some as normal. This guy is a Nazi. Oh Caitlyn Jenner--has she had her dick removed yet?