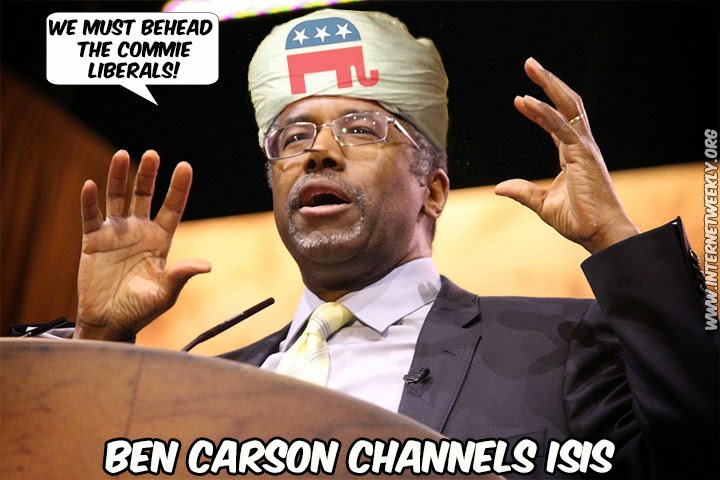 
But the former Johns Hopkins University pediatric neurosurgeon and Fox News commentator “struggled at times through a post-speech press availability, offering vague answers on a number of topics and refusing to answer how he thinks abortion should be criminalized,” the outlet reported.
Referring to recent headlines about bakers getting sued for refusing to serve gay couples, Carson said: “What I have a problem with is when people try to force people to act against their beliefs because they say 'they're discriminating against me.' So they can go right down the street and buy a cake, but no, let's bring a suit against this person because I want them to make my cake even though they don't believe in it. Which is really not all that smart because they might put poison in that cake.”
In 2013, Carson stepped down as commencement speaker at the Johns Hopkins School of Medicine for linking marriage equality to bestiality and pedophilia, which drew a loud outcry from students and faculty. In apologizing, Carson said people had “taken the wrong meaning out of what I was saying.”
Posted by Ulf Raynor at 5:10 PM

This racist piece of shit is inciting his crazy teatard followers to commit murder against us. thee isn't even a single news outlet calling him out for it. There is nothing more vile than one minority wishing harm to another especially when it was being said about blacks not so long ago. What a giant piece of shit he is.

So blacks should've not got all uppity at the 'Whites Only' diner and just gone down the street to a restaurant that serves blacks? Racist dick.