Coffee Shop Owner Kicks Christian Terrorist Out Of His Shop 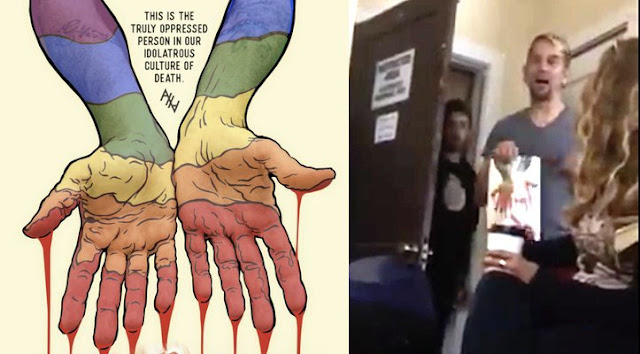 A gay coffee shop owner has taken a stand against anti-abortion campaigners whose leaflets feature rainbow hands dripping with the blood of a dead fetus.
The activists were ejected from Bedlam Coffee in Seattle, Washington, after the gay owner was made aware of the horrific flyer.
On the page, the rainbow hands hover above the fetus, seemingly having just dropped it, below the words: “This is the truly oppressed person in our idolatrous culture of death.”
Christian groups are currently up in arms about bakers not being able to refuse to make cakes for same-sex couples.
But cakes don’t connect a group of people with murder – or even genocide.

This gruesome leaflet does both, directly linking all LGBT people with what these anti-abortion extremists view as comparable to the Holocaust.
On one page, scrawled across the Pride flag are the words “hatred, bigotry, intolerance and oppression”.
Approaching the campaigners – who call themselves abolitionists, thus comparing their cause to slavery – owner Ben Borgman said: “I’m gay. You have to leave.
“This is offensive to me. I own the place.
“I have the right to be offended.”
He showed the group the page of the pamphlet which contains the image of the blood-covered, rainbow-colored hands, and asked them if they were handing out these flyers.
When they confirmed they were, he silenced their protests and said: “I do not want these people in my place.
“Leave, all of you. Tell all your fucking friends: ‘don’t fucking come here.'”
“Just know that Christ can save you,” one of the anti-abortion activists told him –
That was a mistake.
“I like ass,” Borgman responded.
“I’m not going to be saved by anything.

“I’d fuck Christ in the ass, okay?” the owner added.
The website on the pamphlet links to a site called The Tenth Mark, which in turn links to a YouTube page called AbolishHumanAbortion.
The account has around 1,900 subscribers.
It features videos which compare abortion to murder and the Holocaust.
This leaflet was seemingly produced by the very same group.

It tries to reclaim the rainbow from the LGBT community, a perennial tactic of the religious right.
“Today the world is overrun by wickedness again and we’ve taken the symbol of God’s grace and twisted it into a symbol of pride and licentiousness,” the leaflet states.
Just this year, there have been three other occasions when attempts to take the rainbow back as a symbol have failed.
The hateful pamphlet continues: “We are violent, abusive, sexually immoral and greedy.
“We profane marriage through divorce, homosexuality and adultery, and our children suffer the consequences.
“And beyond all this, we are a murderous people who kill our own children in service to ourselves.”

It also warns that God’s judgment against sin “will not tarry forever.” 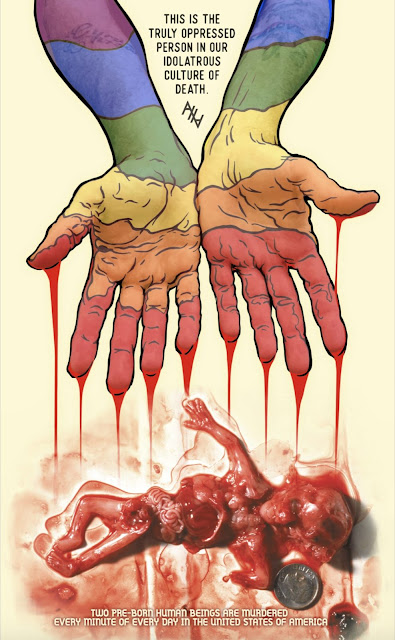