Man Who Tortured 8 Year Old Boy To Death For Being Gay, Goes On Trial 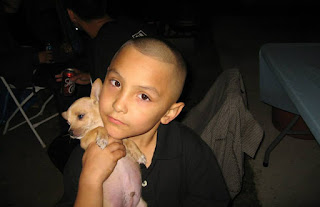 A man is accused of torturing his girlfriend’s eight-year-old son to death because he thought he was gay.
Isauro Aguirre, of Palmdale, Los Angeles, admits murder but denies torture.
His series of brutal acts against eight-year-old Gabriel Fernandez includes dousing the boy in pepper spray, forcing him to eat his own feces and vomit, putting cigarettes out on his skin and beating him with a bat.

Aguirre is also accused of tying the boy up, locking him in a cage and shooting him with a BB gun.
It is also claimed he forced the young victim to dress up in girls’ clothes before going to school, and stressed he did not like Gabriel because he believed he was gay.
His defense attorney John Allan said: ‘He is guilty of murder, but the special circumstance alleged, that he intended to kill Gabriel with the infliction of torture, is not true.
‘Despite the horrific abuse, Isauro never intended for Gabriel to die.’

Gabriel was reportedly kept gagged and bound in a small cabinet until first responders found him on 22 May 2013.
Prosecutors said the boy’s mother, Pearl Fernandez, conspired with Aguirre, now 37, to torture the boy over eight months in 2013.
And when the couple called 911, they didn’t do it to ‘help Gabriel’.
‘They called 911 to cover up what they did,’ they said.
Aguirre, who is 6ft 2in, was 270 pounds at the time of Gabriel’s death.
The boy – at 4ft 1in – weighed just 59 pounds.
Texts were also shown to the jury which allegedly show Aguirre and Fernandez conspiring to torture and murder Gabriel and then cover it up.
James Cermak, a paramedic for LA County Fire Department, said there was an ‘unbelievable’ amount of damage to the boy’s body when it was found at the couple’s apartment in Palmdale.
Fernandez will be tried separately.

Four social workers are also being prosecuted because of his death.

There is no legal form of punishment that can be adjudicated on these six adults that could ever compensate for the cruelty they inflicted on this poor defenseless child.
Posted by Ulf Raynor at 3:45 PM