It's About The Simple Things 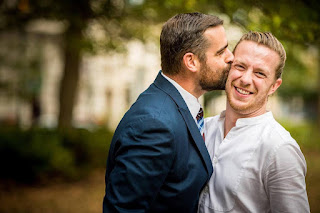 In a recent interview with The Advocate, out Pennsylvania state Rep. Brian Sims talked about being public with his boyfriend of three years.
The 39-year-old Sims is among only a handful of out politicians who include an image of their partners in communications to constituents.


Sims uses a picture of himself and Brandon McMullin strolling through a park in email blasts to supporters.
“Before I first ran for office, among the prevailing advice I often heard about LGBT candidates is that they should avoid including their spouses in campaign literature,” Sims says in the email. “The exact phrasing may have varied a bit, but in the end it was a form of ‘your partner is great, but don't put same-sex couple photos on campaign literature or you'll alienate voters.'”
“I always understood what they were saying but it was so frustrating to be fighting to elect out, proud advocates of the LGBT community while simultaneously telling them it’s in their best interest to shy away from who they are. For so many of today's LGBT candidates, that's happily no longer a reality and frankly, if you’ve met me, you know that I've always had a tough time not being who I am.”
The Advocate points out that while some of the six out Congress members and one senator mention their spouses or partners in their online congressional biographies, none includes a photo, a common practice among heterosexual politicians.
Sims said that he believes voters want to see his “authentic” self.
“I like somebody who's proud of the relationship that they're in,” Sims said.
Sims said that he and McMullin are “hand-holders.” At first they held hands in public to send a message that they're together, but now it's “a way to show people we have a romantic life we're proud of.”
“I'd like to think we do it instinctively now, but I don't think either of us ever forget the purpose. It's also I love the guy and I want to hold his hand,” he added.

Our community needs more out and proud leaders like Sims.
Lack of leadership and support for that leadership is the continuous bane of our communities development and evolution.
This alone will be how we lose the hard fought for rights we have achieved, picked and eroded away by Trump and his anti-gay lackeys while the gay community continues to party away and bury their heads in the sand pretending like their equality is assured, achieved or worse yet irrelevant.
Posted by Ulf Raynor at 3:21 PM