Religion Of Peace...For Whom Exactly? 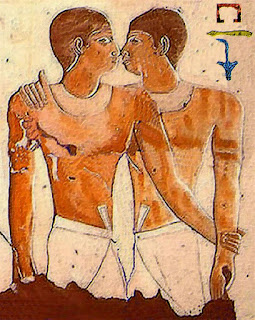 From Pink News:
Police in Egypt are using gay app Grindr to lure gay and bisexual men to hotel rooms to arrest them.
Dalia Abdel-Hameed, a gender rights researcher with the Egyptian Initiative for Personal Rights unearthed dozens of police reports.
In the reports, a “cultivation” technique is set out which sees targets seduced using Grindr.
They are lured to hotel rooms and arrested by authorities.
She described a “mania” around penetration.
“It’s related to the fact that men are using apps more than women and an obsession of who is being penetrated.
“There is this penetration mania in Egypt due to religious reasons, mostly.”
Earlier this month, four people were imprisoned for homosexuality in Egypt.
The Haram Misdemeanor Court sentenced the defendants to three years in prison on Saturday, for acts which were “inconsistent with public morality and homosexuality”.
The illegal actions were committed in a residential apartment in Hadayeq al-Ahram, Giza, near the country’s famous pyramids, according to the Egyptian Independent.
The convicted people, whose genders and names have not yet been reported, were arrested as part of the ongoing crackdown on the LGBT community in Egypt.
Police said they received an arrest warrant from the public prosecution before making the arrests, and that aphrodisiacs and sex toys were confiscated from the scene.
The crackdown began last month, after at least one rainbow flag was waved at a concert by the Lebanese band Mashrou Leila, whose lead singer is openly gay.

It is de facto illegal to be gay in Egypt, under public morality and order laws. Those convicted of homosexuality can be sentenced to as much as 17 years in prison.
Last week, authorities banned the media from reporting on the issue – while imposing a Russia-style ban on LGBT people being mentioned on TV and film, as well as radio, online or print media.
Egypt’s Supreme Council for Media Regulation issued the statement, which “prohibits the appearance of homosexuals or their slogans in the media”, branding homosexuality a “sickness”.
The order forbids any appearance of gay people “in any media outlet whether written, audio, or visual, except when they acknowledge the fact that their conduct is inappropriate and repent for it”.
Though the crackdown has largely targeted gay men, one woman was detained by authorities on suspicion of “promoting sexual deviancy” and “habitual debauchery” for waving the rainbow flag.
It is believed to be the first such incident involving a woman in several years.
Egyptian-born gay activist Omar Sharif Jr., the grandson of Egyptian actor Omar Sharif, spoke to PinkNews about the purge earlier this month.
He said: “I am angry and disheartened by the arrests of fellow Egyptians over the past few days.
“The action of authorities are an affront to basic human rights and dignity. No one should be arrested for proudly expressing their authentic selves; they should be celebrated.
“Forcing people to undergo invasive medical examinations is tantamount to torture.
“Let’s be clear, Egyptian authorities are not protecting morality; they are spitting in the face of it.”
Posted by Ulf Raynor at 4:31 PM