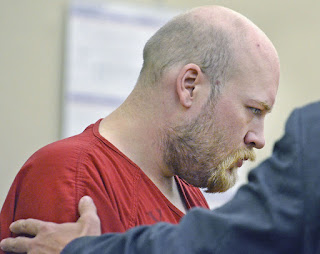 From Pink News:
A prominent ‘alt-right’ figure who interned for Milo Yiannopoulos is battling a first degree murder charge.
Lane Davis, known online as Seattle4Truth, is a popular figure among alt-right communities and white supremacists online.
The online activist had had thousands of followers online across his YouTube channel, and was a regular contributor to pro-Trump and alt-right communities on Reddit.
But Davis, a former ghostwriter for Breitbart columnist Milo Yiannopoulos, was arrested earlier this year on a first-degree murder charge.
The Daily Beast reports that Davis, 33, stands accused of stabbing his father Charles to death after a vocal argument in which his father branded him a Nazi.
Davis allegedly chased his parents around their home in Washington state after a dispute, “screaming about the paedophiles taking over the US”.

The website obtained a recording of the 911 call that his mother Catherine asked for police to be dispatched to the house.
She said: “He just gets out of control and he’s ranting about stuff from the internet.
“We’re trying to stay away from him, but he’s chasing us around the house… he’s mad about something on the internet about leftist pedophiles and he thinks we’re leftist and he’s calling us pedophiles.

“He just lives on the internet and he gets really worked up about everything that’s going on. He needs an intervention of some kind here.”
In later fragments of 911 calls, his distraught mother says: “He stabbed him!”
She later added: “He’s dead, he’s dead, he’s dead.”
When police arrived at the scene, they found Charles dead.
Davis was arrested and held on $1 million bail. He pleaded not guilty to first-degree murder, with a trial is slated for January.
But the case raises fresh questions about the issue of radicalisation in the alt-right movement that has grown up around Donald Trump.
Davis was also a former close associate of gay columnist Milo Yiannopoulos, a ‘hero’ of the far right and a prominent Trump supporter.
Yiannopoulos employed Davis as a ghostwriter and researcher, according to the Daily Beast.
But the two later fell out.

In 2016 Davis shared an article making a string of allegations against Yiannopoulos, tweeting: “Stealing charity money one week, making delusional demands like you’re a fucking rockstar the next. What a faggot.”
Buzzfeed recently published documents exposing Milo Yiannopoulos’ links to white supremacists and neo-Nazis.
The explosive release by Buzzfeed News revealed intimate details of his dealings, raising serious questions about his conduct.
One video released by Buzzfeed shows Yiannopoulos singing ‘America the Beautiful’ at a far-right karaoke event, attended by self-described neo-Nazi Richard Spencer.
Spencer and many other in the crowd are clearly visible in the clip performing Nazi salutes directly in front of the stage as Milo sang without any objection.
In a statement Yiannopoulos claimed that he has “severe myopia” that made it impossible for him to see the Hitler salutes, just feet away.
Buzzfeed also published multiple disclosures from Yiannopoulos’ emails and online documents, which reveal his connections to Breitbart chief Steve Bannon, Donald Trump’s former Chief Strategist.

The email trails also reveal that Yiannopoulos had communicated with Andrew Auernheimer, the admin of neo-Nazi website Daily Stormer – as well as self-described white nationalist Devin Saucier.
Yiannopoulos described Saucier as “my best friend” in one email to another contact, and regularly asked him for input on stories.
Elsewhere the documents appear to confirm what has been rumored for some time – that the writer’s Breitbart columns are often ghostwritten by alt-right activists.
The primary ghostwriter for Yiannopoulos, Allum Bokhari, jokingly refers to him as “MEIN FUHRER” in emails as the pair discuss a 3,000 word feature penned by Bokhari that was later published in Milo’s name.
The columnist shared his passwords with his many ghostwriters and assistants.
One of his logins used the password ‘LongKnives1290’ – an apparent references to Hitler’s purge known as ‘the Night of the Long Knives’, and 1290, the year all Jews were expelled from the Kingdom of England.
Bokhari also added that one of Yiannopoulos’ passwords “began with the word Kristall”. Kristallnacht was a 1938 riot against Jews carried out by Hitler.
Yiannopoulos was sacked from Breitbart earlier this year after damaging tapes emerged in which he discussed men who have sex with underage boys.
In one video, Yiannopoulos attacks the age of consent as an “arbitrary one-size-fits-all policing of culture”.
He also claimed that “in the homosexual world, particularly, some of those relationships between younger boys and older men help those young boys discover who they are”.

Yiannopoulos later confirmed he would be “resigning” from Breitbart in the wake of the row.
He was reportedly already in line to be sacked, with more than a dozen staffers were prepared to quit if he was not removed.
The writer previously angrily hit back at critics in a Facebook post titled “A note for idiots”.
Referring to the unedited five-minute tape of his comments, he said: “There are selectively edited videos doing the rounds, as part of a co-ordinated effort to discredit me from establishment Republicans, that suggest I am soft on the subject.
“If it somehow comes across (through my own sloppy phrasing or through deceptive editing) that I meant any of the ugly things alleged, let me set the record straight: I am completely disgusted by the abuse of children.”

In a second statement he said: “Breitbart News has stood by me when others caved. They have allowed me to carry conservative and libertarian ideas to communities that would otherwise never have heard them. They have been a significant factor in my success. I’m grateful for that freedom and for the friendships I forged there.
“I would be wrong to allow my poor choice of words to detract from my colleagues’ important reporting, so today I am resigning from Breitbart, effective immediately. This decision is mine alone.
“When your friends have done right by you, you do right by them. For me, this means stepping aside so my colleagues at Breitbart can get back to the great work they do.”
The far-right hero was already deeply controversial, previously claiming he would ‘cure’ himself of being gay if he could, describing trans people as “mentally ill gay men dressing up for attention”, and using a university lecture to single out and bully a transgender student on-stage.
He said: “I would agree it would be better if I didn’t behave like this, and if I could choose to be heterosexual I would do so.
“If I could choose, I wouldn’t be a homosexual. That doesn’t make me self-loathing.”

“I don’t think it is self-loathing to acknowledge that being a homosexual is obviously a sort of an aberrant sexuality, something that mother nature does on the fringes, nobody really knows why, and it could be an elegant variation in the evolutionary process, it could be all sorts of things.”
Posted by Ulf Raynor at 6:24 PM