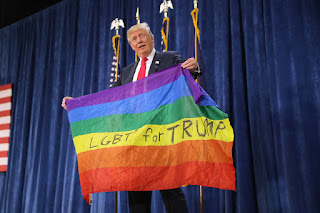 From Pink News:
The White House has revoked support for a rainbow flag ceremony at the historic Stonewall Inn.
The National Parks Service had been set to make a historic appearance at the Stonewall National Monument in order to raise the rainbow flag.
President Obama dedicated the Stonewall National Monument in June 2016.
The event had been scheduled for noon on Wednesday and would have been the first time the rainbow flag would have flown over federally funded land.
It would have also been the first time the NPS had been responsible for the care of such a symbol.
But the Trump Administration pulled the plug, as the NPS withdrew from the event at the last minute.
It also gave up responsibility for maintaining the flagpole and its flag. Instead it will be managed by the City of New York.
As well as abdicating its responsibility for the flag, the NPS also removed the map of the Stonewall National Monument from its website.
Staff from the NPS would have attended, but Barbara Applebaum the Chief of Interpretation, Education and Visitor Services pulled out of speaking, saying she had a “scheduling conflict”.
The Interior Department was ordered by Trump in April to review all landmark designations made in the past 20 years “to discern whether they are within the law’s intent.”
According to the NPS, which defended its decision to pull out, the confusion comes down to a jurisdiction issue.
“The flagpole is not on federal property. It’s a separate monument to the first person killed in the Civil War. It has never been part of the Stonewall National Monument, although it is located there. The flagpole is not managed by the Park Service. We gifted the flag to New York City Parks,” a spokesperson said.
But the move has been seen as part of a wider distance growing between the White House and anything LGBT+ related.
The news comes as President Trump is to address the conference of a recognized anti-LGBT hate group.
Trump will speak at the Values Voters Summit in Washington, DC on Friday.
He will become the first president to address the gathering, run by an organization classed as a “hate group”.
The event hosts a coalition of white supremacists, far right activists and religious extremists among its attendees.

Typical and typically disgusting. Welcome to Nazi America. God bless Robert Mueller--but if he fails -then what? And how long do these regressive and degrading policies continue? What will be the long term effects in racial, social, healthcare and environmental issues? We are witnessing the Rape of America. Donald J. Trump is forcibly fisting all liberals and any policies that preserve our freedoms and dignity and protect our equality. He champions white supremacists, negates the LGBT community and increases racial division through a series of lies and blatant attempts to suppress journalistic truth. He is a champion of the second amendment over the first amendment. In fact it is obvious that he disparages every sentence of the first amendment --if it was even read to him.