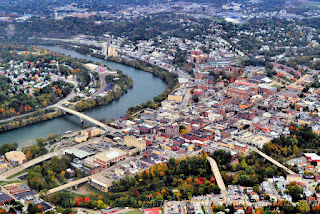 The Morgantown City Council on Tuesday voted unanimously to add protections for lesbian, gay, bisexual and transgender residents to its human rights ordinance, making it the 11th city in West Virginia to do so.
City leaders agreed to add sexual orientation, gender identity, familial status and veteran status to its ordinance. It now reads: “Equal opportunity in the areas of employment, public accommodations, housing accommodations or real property is hereby declared to be a human right or civil right of all persons without regard to race, religion, color, national origin, ancestry, sex, age, blindness, disability, sexual orientation, gender identity, familial status, or veteran status.”

Mayor Bill Kawecki applauded the move.
“The only thing I'd say is this simply verbalizes the kind of community I really hope that we are,” he said. “I'm happy that's the case, because that's the kind of community I want to live in.”
According to the Charleston Gazette-Mail, Kawecki said that about 45 people spoke in support of amending the ordinance at Tuesday's meeting and three people spoke against it, two of whom were not residents.
Andrew Schneider, executive director of Fairness West Virginia, said that passage “sends a strong message to the state Legislature that West Virginia is more than ready to add sexual orientation and gender identity to the state's nondiscrimination law.”

Morgantown is my stomping ground, I live just a few miles south of it.
It really wasn't that difficult to get this passed since this is one of the largest populated areas in West Virginia and it's also home to West Virginia University.
This is Trump country though, mostly due to a now dying coal industry and Trump has (of course) sworn to bring back coal mining jobs to the state; it's a lie of course, but West Virginians cling to the idea of good paying mining jobs and have bought his con game hook line and sinker.
This is a very poor state and extremely conservative...but truthfully the people, for the most part, are openly friendly and most have a live and let live attitude.
Fun fact:
The state of West Virginia is named after Queen Elizabeth the "Virgin Queen" of England.