From Hell's Heart I stab At Thee 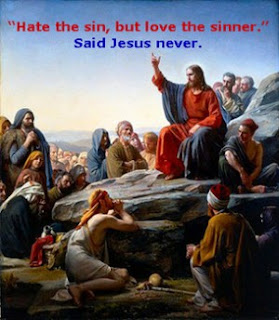 From Pink News:
Leaked emails have revealed a string of shocking orders from Catholic church bosses urging priests to turn down the funerals of gay people.
The emails ask priests to consider whether the deceased was gay and if they had “repented” before dying.
It also calls for “manifest sinners” to be denied funerals to avoid “scandal” among church-goers.
The leaked set of directives urges priests to minimize “the risk of scandal and confusion” when asked to conduct the funeral service of a person in a “notorious homosexual relationship”.
It asks priests to consider, “Was the deceased or the ‘partner’ a promoter of the ‘gay’ lifestyle?” and, “Did the deceased give some signs of repentance before death?”
It also instructs that loved ones of the deceased gay person “should not have any public or prominent role at any ecclesiastical funeral rite or service”.

It adds that the grieving partner should be removed from “any liturgical booklet, prayer card, homily, sermon, talk by the priest, deacon”.

The document continues: “If the situation warrants…ecclesiastical funeral rites may be denied for manifest sinners in which public scandal of the faithful can’t be avoided.”
The emails have been attributed to Vicar General of the Catholic diocese in Madison, Wisconsin, Msgr James R Bartylla, according to Pray Tell.
In a statement, the diocese’s communications director Brent King told the Huffington Post that the leaked remarks do “conform with the mind of the bishop and meet his approval,” but that it was not an official document.

LGBT activists within the church have reacted angrily – labeling the orders “shameful”.
Marianne Duddy-Burke, executive director of the Catholic LGBT group DignityUSA, said: “This document is the very antithesis of pastoral care.
“It shows that this bishop believes that lesbian and gay people who have lived a deep commitment to a spouse or partner should be demeaned even in death.
“Our families could be refused the sacraments of our faith at the moment of their greatest grief.
“This is heartless. It is cruel. It is unchristian in the extreme.”

It isn’t the first Catholic institution to propose barring gay people from proper funerals.
A Catholic Bishop in Illinois has said that same-sex spouses should be denied communion, last rites and funeral rites.
Bishop Thomas Paprocki, who oversees the Springfield diocese, said that unless same-sex spouses repent, they should be denied the rites.
He wrote that people in same-sex marriages “should not present themselves for Holy Communion, nor should they be admitted to Holy Communion.”
Adding that anyone in a same-sex marriage who is facing death can only receive communion if they express “repentance for his or her sins.”

Paprocki also wrote that “unless they have given some signs of repentance before their death,” they should not be afforded a Catholic funeral.
Meanwhile Pope Francis claimed that acceptance of trans people would make people infertile.
The pontiff also condemned the concept of non-binary people, saying that this too somehow jeopardizes the creation of life.
He accused these people of wanting to eradicate gender-associated behaviors.
“Rather than contrast negative interpretations of sexual differences … they want to cancel these differences out altogether,” he said.
said the increased visibility of trans people was “terrible”.
Growing acceptance of trans issues was due to “ideological colonizing” through textbooks financed by wealthy people and institutions in “very influential countries,” he added.

All of this while also hypocritically spewing that most inane of statements... "Hate the sin, love the sinner."
To which I have always and always will respond:
"To label someone a “sinner” reveals an “us vs. them” mentality, where you are the “righteous” person looking down your nose at the poor, wretched, ignorant “sinners” down below who just cannot get their act together. If only they would listen to what you tell them to do…"
Posted by Ulf Raynor at 5:54 PM