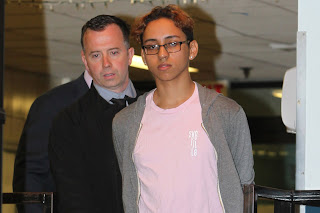 A New York Grand Jury have reduced the charges of the gay teen accused of fatally stabbing his bully from second-degree murder to manslaughter.
Abel Cedeno, 18, was arrested on 27 September after stabbing two of his classmates, injuring one and killing the other.
Cedeno, who pleaded not guilty, faced the grand jury on 17 October.
‘I was trying to get him off me,’ Cedeno told Gay City News, claiming he knew his bullies had gang connections.
He also stated that many other students at his school, Urban Assembly School for Wildlife Conservation in the Bronx, carried weapons including knives and guns.
‘I was afraid for my life,’ Cedeno said.
Cedeno allegedly purchased the knife on Amazon and was carrying it for self-defense.
‘No way did I think someone could die,’ he said, though he was convinced he would die if he did not defend himself against the bully’s (Matthew McCree, age 15, who was fatally stabbed) attack.
‘[McCree] knew me as the gay kid with the long hair,’ Cedeno said. ‘He hated that “entity.” He didn’t know me.’
Despite Cedeno’s attempt to use the knife to ward McCree off, the 15-year-old kept ‘pummeling’ him.

It was when Cedeno was being punched in the face that he ‘snapped’ and began using the knife.
‘I don’t remember that much,’ Cedeno says of the stabbing.
Cedeno’s bail was set for $500,000, which his attorney, Christopher R. Lynn, called ‘outrageous.’
Before the grand jury session, Cedeno was meant to appear in front of a judge. The courtroom was filled with teens supporting both Cedeno and McCree. Ava Talley of the New York Transgender Advocacy Group (NYTAG) was also in attendance and recalls McCree’s family members threatening her and using homophobic slurs.
‘His family keeps saying he was not a bully, but they use homophobic and transphobic rhetoric,’ Talley said. ‘His whole group of supporters was doing it.’
Lynn, once on the council for the Coalition for Lesbian and Gay Rights, has Robert J. Feldman as his co-counselor. Both Lynn and Feldman are gay. They waived Cedeno’s appearance before the judge but called upon the District Attorney to have the 25 students and two teachers who witnessed the fight to testify before the grand jury.
All of McCree’s family have denied his involvement in gangs, but supporters of Cedeno displayed screenshots of online postings of gang members claiming McCree as one of them and vowing to avenge his death.

‘We’re getting threats now,’ Cedeno’s sister Vanessa said. ‘We just want justice for Abel. No one wanted for this to happen. He was bullied from the sixth grade and would come home with bruises. The schools failed him. My brother should not be in jail. We shouldn’t have to be afraid to be ourselves, especially in school.’