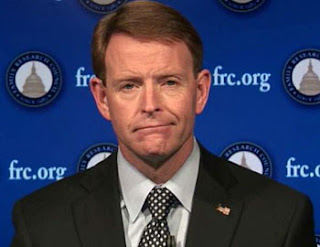 A petition asking CNN to stop hosting Family Research Council (FRC) President Tony Perkins to speak on behalf of Christians has attracted more than 32,000 signatures.
Faithful America, a group working toward “reclaiming Christianity from the religious right,” launched the petition last month after CNN turned to Perkins for his reaction to the Supreme Court's decision which struck down the Defense of Marriage Act (DOMA).
“From coast to coast, church bells rang out to celebrate the Supreme Court's decision overturning the so-called Defense of Marriage Act,” the petition reads.
“But CNN once again turned to a hate-group leader to speak on behalf of America's Christians. Less than an hour after the decision was announced, they interviewed Tony Perkins of the Family Research Council, who falsely warned that the court decision would lead to 'religious organization losing their exemption.'”
“CNN host Wolf Blitzer failed to challenge Perkins' lies, nor did his segment feature any Christian leaders with a different point of view – despite polls showing that a majority of Christians actually oppose the Defense of Marriage Act.”
“In fact, CNN has a long history of inviting Perkins to represent the Christian point of view, without disclosing to their viewers that his organization has been officially designated a hate group by the Southern Poverty Law Center – largely because he has falsely claimed that gay men molest children.”
Most recently, FRC launched two “ex-gay” groups to fill the void left by the demise of Exodus International. Both groups promote the notion that gay men and lesbians can – and should – alter their sexuality.
Posted by Ulf Raynor at 4:49 PM