Pope Francis Says: "Who Am I To Judge Gay People?" 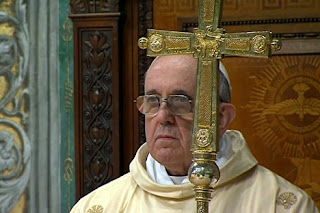 Pope Francis on Monday said that he's not in a position to judge gay priests.
“If someone is gay and he searches for the Lord and has good will, who am I to judge? Francis rhetorically asked reporters aboard the papal aircraft on the journey back to the Vatican from his first foreign trip to Brazil.
Reporters raised allegations made by Italian news weekly L'Espresso that a trusted monsignor had a scandalous gay past.
He responded that his investigation found no evidence to back up the paper's claims.

The Pope added that gay people should not be marginalized.
“The Catechism of the Catholic Church explains this very well. It says they should not be marginalized because of this [sexual orientation] but that they must be integrated into society,” the pope said.
“The problem is not having this orientation. We must be brothers. The problem is lobbying by this orientation, or lobbies of greedy people, political lobbies, Masonic lobbies, so many lobbies. This is the worse problem.”

This is what the Catechism says about homosexuality:
“Homosexuality refers to relations between men or between women who experience an exclusive or predominant sexual attraction toward persons of the same sex. It has taken a great variety of forms through the centuries and in different cultures. Its psychological genesis remains largely unexplained. Basing itself on Sacred Scripture, which presents homosexual acts as acts of grave depravity [Cf. Gen 19:1-29; Rom 1:24-27; 1 Cor 6:10; 1 Tim 1:10], tradition has always declared that “homosexual acts are intrinsically disordered.
They are contrary to the natural law. They close the sexual act to the gift of life. They do not proceed from a genuine affective and sexual complementarity. Under no circumstances can they be approved.”
So the Pope says he doesn't judge gay people but then adds that it's our orientation that's a problem and that it's wrong for us to lobby for ourselves...so, basically, the Pope says we just should climb back in the closet, don't have homosexual relationship and don't seek equality because we are still "disordered".
Exactly what part of your belief isn't judging gay people?

The vatican gay lobby is in order of earn economic profits and political power by means of profesional promotions in the catholic hierarchy. Be a high-ranking person not to serve the people in greatest need but himself and fellows. The real problem is an political American and European problem: religious right, Tea Party and neo-nazi and neo-fascists parties or other public attitudes. In Latin America is a machism matter, also dangerous an discriminator, in all cases is violence against the fellow creature. This is the real sin.