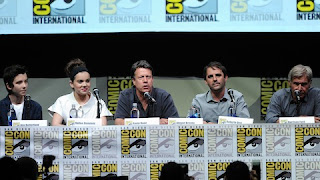 From The Towleroad:
Yesterday in Hall H at San Diego Comic-Con, the Q&A session for Ender's Game got right to the point about the controversy surrounding the film. The very first fan to the mic asked, "There’s actually been a lot of controversy about the author of the book. How involved was he in making the film?”
The film's producer, Roberto Orci, responded,


"We support the Lionsgate and Summit statement in defense of LGBT rights," Orci said. "There are a lot more people working on this movie and we'd hate to see the efforts of all the people thwarted for the opinions of a lesser percentage of people behind the movie."


The room broke out in applause.
Not to sound ungrateful for explicit support, but answering the question of "How involved was he?" with "We support our studio's statement of defense for gays," doesn't actually answer her question. Like, at all. Additionally, and I freely admit that this is a nit-pick, saying "We support our studio's statement" rather than making one of your own feels a bit half-assed in terms of support.
Wired has a pretty thorough analysis of the event and the boycott. It includes Milk writer Dustin Lance Black's puzzling declaration that the boycott "is a waste of our collective energy,” and director Gavin Hood questioning the disconnect between the themes of compassion and empathy in the book and Card's real-world views of hateful intolerance.
Over at Huffington Post, they have Harrison Ford commenting on the controversy with,


"I don't think that issue rears its head in the work. No part of the story concerns Mr. Card's theories about society in terms of gay issues or homosexual issues."


Which is a complete misdirection. As I pointed out the other day, the boycott is protesting Card himself, not the content of the film.
It's uncertain if the positive reaction at Comic-Con will translate into support for the boycott, but to have an entire hall of con attendees applaud in support of LGBT rights is an encouraging sign that cretins like Card are on their way out.
Orci sums it all up doesn't he? It's all about making money for Lionsgate whether that comes off the backs of gay people or not, they don't give a shit.
Personally, I don't give a rats ass about any asshole who participated in the production of this movie, they embraced Card's veiws knowing what he is and they didn't have one iota of concern for the gay community while doing so.
I for one won't just be boycotting Ender's Game, I'll be boycotting every single actor in the film, every movie ever made by Lionsgate and anyone I KNOW who were involved in the making of it.
That includes bitches like Dustin Lance Black, who for no other reason, supports the film because of it's intrinsic value as a work of art...work of art by a fag hating religious zealot who stands to profit from it.
I suppose if they made Mein Kampf into a movie we should just view that as a work of art too Mr. Black?
Posted by Ulf Raynor at 11:58 AM

I agree with you 100% they will receive none of my money actors and all. Done supporting all the Hollywood bigots.