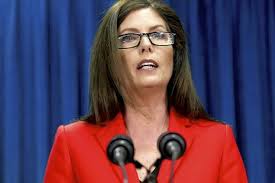 Pennsylvania Attorney General Kathleen Kane on Thursday said that she cannot defend the state's law prohibiting gay marriage.
“We are the land of the free and the home of the brave, and I want to start acting like that,” Kane said during a press conference held at the National Constitution Center in Philadelphia.
Openly gay Pennsylvania state Rep. Brian Sims tweeted his thanks: “Attorney General Kathleen Kane, if you were a man I'd marry you!”
Kane endorsed gay nuptials during her campaign last year.
Her decision likely leaves Governor Tom Corbett to defend the law. Corbett, a Republican, has previously expresses his opposition to marriage equality.
On Tuesday, the American Civil Liberties Union (ACLU) filed a lawsuit in Federal District Court in Harrisburg challenging the state's law. Kane and Corbett are listed as defendants in the suit. Plaintiffs in the case include 10 couples in long-term committed relationships plus one widow.
The ACLU also announced cases in North Carolina and Virginia.
Posted by Ulf Raynor at 5:10 PM